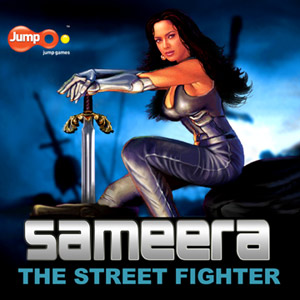 Speaking to AnimationXpress.com, Salil Bhargava, CEO, Jump Games, shared, “The contest includes the popular title Sameera- The Street Fighter. Sameera’s game is doing well in the market and has a mass appeal. Also, she is very popular among the youth.”

He further added, “Today Bollywood is the biggest source of entertainment content in India and it is natural for gaming to be an extension of this medium. A host of Bollywood stars are now exploring the option of tying up with gaming companies to not only add an additional revenue source but also as an extension of their brand image to reach out the masses.”

The grand winner of the contest will win a date with the popular Bollywood actor Sameera Reddy. Other daily, weekly and monthly prizes include gifts like Ipods, PS IIs, XBoxs along with a Plasma TV for one lucky winner.

Speaking about her association with game, Sameera Reddy exclusively shared with AnimationXpress.com, “My association with the game has been fantastic and my new game is ever more exciting and on the edge than the previous one. Gamers will really enjoy playing the games and will also get opportunities to win the attractive prizes.”

The games featuring in the contest will be available for Reliance subscriber on R-World across the country. To be eligible to take part, they need to submit high scores for each game.