Penta Esports, the esports division of Newgen Gaming has announced its upcoming tournament titled, ‘Penta Challenge – Valorant’, supported by Facebook Gaming and Trinity Gaming. This tournament will be a part of Penta Esports’ newly launched IP, ‘Penta Challenge’. Taking place from 5October to 24October, the tournament has a prize pool of Rs5,00,000 and will have two open qualifiers between 5October to 10 October and 12October to 17October, followed by a Grand Finale where two teams from each qualifier and four invited teams will battle it out for the winner’s title. 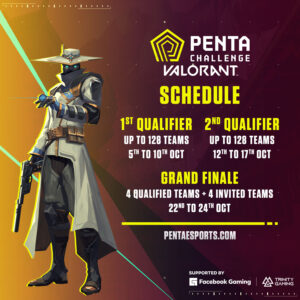 The registrations for the tournament started on 24 September and will go on till 8October on Penta Esports’ newly launched platform. Matches will be broadcast quarter finals onwards for qualifier 1 and 2, while all matches from the Grand Finale will be broadcast. The matches will be available for streaming exclusively on Penta’s Facebook Page.

Says Penta Esports CMO Akshay Paul “We’ve always had the vision to bring opportunities to the player and amazing viewing experience to the spectators and our newest IP, Penta Challenge, is a step in that direction. While we’ll start with Valorant, going forward, we will have the Penta Challenge for multiple game titles.”

Trinity Gaming founder and CEO Abhishek Agarwal says, “We’re always on the lookout for good partners to be able to bring tournaments like these for the Indian esports community. Our vision is absolutely in line with the team at Penta Esports and we’re sure this is going to be an amazing event!”

This event will also mark the launch of Penta Esports’ platform, Pentaesports. The platform will be a one stop destination for all things esports, including match schedules, match results, VODs of tournaments and leagues, content, news, announcements and much more.

The platform will allow users to discover and register for tournaments. It will also allow teams to create recruitment posts and players to find teams. This will enable a lot more players to participate in tournaments for team-based game titles.

Penta Esports head of esports, Kiran Noojibail said, “We’ve been working on this platform for a while and it feels rewarding to launch it for everyone. We wanted to create a platform for Indian esports players and enthusiasts, which encompasses all major aspects of esports. Penta Challenge – Valorant will be the first tournament for our platform and we look forward to building a strong community through the platform!”

Founded by industry veterans Anurag Khurana, Kiran Noojibail and Akshay Paul, Penta Esports aims to disrupt the ecosystem in India with a holistic approach towards the sector, including leagues, tournaments, content and much more.

Prize Pool for the tournament: