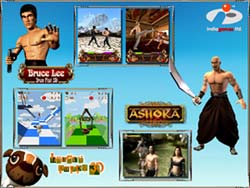 Leading Indian game publisher Indiagames is in the process of developing Nex-Gen 3D BREW games for the mobile. The company announced this development during the recently held Brew Developers Conference (India) 2005 at Grand Hyatt in Mumbai.

Indiagames CEO Vishal Gondal told Animation ‘xpress, “We are pleased to be developing games for QUALCOMM’s superior 3D movile platform. The BREW solution’s flexibility and scalability has enabled us to create innovative wireless applications that continue to advance the realm of mobile games.”

“QUALCOMM is pleased to be working with publishers and developers like Indiagames who consistently push wireless gaming forward by bringing branded content to the 3D gaming space,” said Vishal Gupta, director of product technologies for QUALCOMM India. “The strength of the BREW solution lies in its ability to allow developers to focus on what they do best – the creation of advanced wireless content for mobile consumers worldwide.”

The BREW 3D games Indiagames plans to develop are:

Ashoka: Ashoka is intended to be a cross-platform, current-generation, third-person, action/adventure game. Indiagames will focus primarily on porting the demo level of Ashoka onto QUALCOMM’s Enhanced Platform chipsets. Since this is intended to be a cross-platform game, Indiagames has gone to great lengths to ensure a consistent gameplay experience via console and cell phone. This will allow users to experience multi-platform play, in which a player might be able to play the game on the mobile phone, save game data and continue from where he left off on his console.