It is true that the consumption of gaming has increased over the years and the recent pandemic has seen a surge in the number video game users in various Asia Pacific region especially in India  according to the blogpost of audience measurement and analytic firm Comscore.

The blog post was titled by Video games in Asia: locked and loaded and was published by Comscore senior insights manager Alex Gevers. The report shares that the relative importance of video games has increased during the lockdown period in countries such as India, compared to other alternative forms of entertainment. Comscore measured video game audiences’ sizes during the January to May 2020 period in Australia, China, Hong Kong, India, Indonesia, Japan, Malaysia, Singapore, Taiwan, and Vietnam.

The initial step for them was to analyse how audience sizes trended during the pandemic and for it they have gathered information of unique individuals across both desktop and mobile devices who visited sites and apps where they could play online video games or find information about video games.  They noticed that by May 2020, lockdowns were relaxed in many countries in the Asia-Pacific region, and economic activity had resumed. However, despite life returning to ‘normal’, audience levels for the gaming category have remained high in all countries. There are some exceptions to this: namely China and Vietnam. According to the report from January to May India has leaped from 100 to 121  desktop and mobile gaming audience unique visitor index  which is second highest after Singapore whereas in April India topped the chart of unique visitor index with by 128. 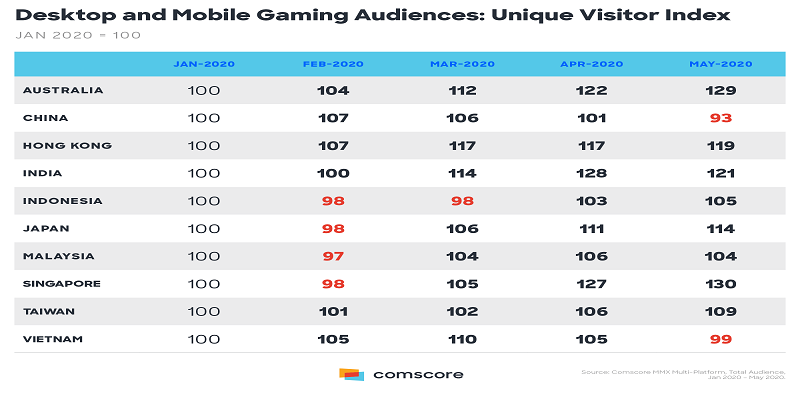 It is a fact that online gaming has grown its audience during the coronavirus pandemic in all countries and they have figured out that the size of the gaming audience increased in size relative to the entertainment category. In fact, for some countries such as India, Indonesia and Malaysia, video games audiences reach nearly two-thirds of the size of entertainment audiences.

The unique visitor to gaming sites as percentage of unique visitors to entertainment site in desktop and mobile device has increased from  54 per cent  in January 2020 to 65 per cent in May 2020 which is an increase of 11 per cent in total and is the second-highest after Indonesia at 67 per cent in 2020. 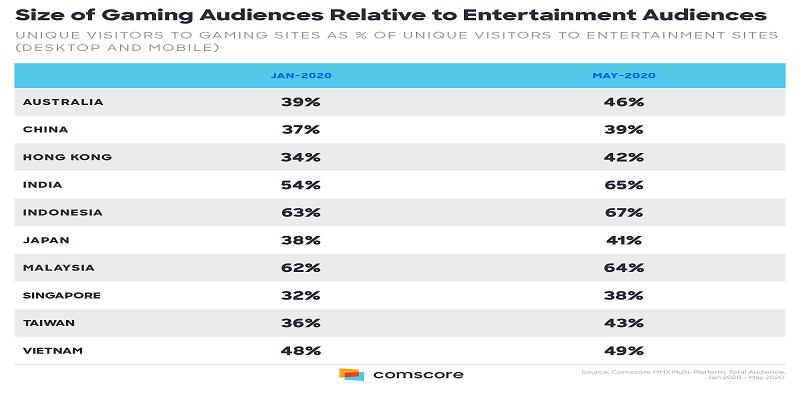 Most of the time spent online was spent on a handful of digital categories, and gaming  has been one of them where the percentage of time spent per person shifted from January to May 2020 by +62 per cent . The data demonstrated the importance and potential of video games as a marketing channel: as the large audience presence will create opportunity for advertisers to target millions of consumers from a wide demographic.