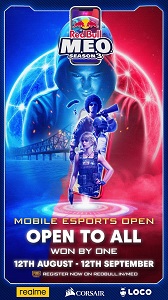 Clash Royale was the Red Bull M.E.O. tournament in India in 2018 and 2019 and now Red Bull M.E.O. Season 3 will feature a tournament of PUBG Mobile. Six matches will be played in each lobby across Erangel, Sanhok, Miramar, and Vikendi maps.The top 32 teams from the qualifiers will progress to the semifinals and the top 16 teams will move on to the national finals. The Indian champion – winner of the national final – will get a chance to go up against the best mobile gamers from over 20 countries at the World Final in 2021.

Red Bull M.E.O. Season 3 in India starts with qualifiers from 12 August 2020 onwards with the finals expected to take place on 12 September. The World  Season 3 are currently planned to be hosted in Turkey and can be expected for the beginning of 2021.