Fortnite developer Epic is suing Apple and Google after both pulled Epic’s hit game from their app stores over direct-payment disputes. As of right now, neither are allowing users to download and install Fortnite on phones through their digital marketplaces.

The suits come after Apple and Google blocked the game after Epic introduced a direct payment system, effectively shutting out the tech titans from collecting fees, CNET said.

According to the lawsuit, “This case concerns Apple’s use of a series of anti-competitive restraints and monopolistic practices in markets for (i) the distribution of software applications (“apps”) to users of mobile computing devices like smartphones and tablets, and (ii) the processing of consumers’ payments for digital content used within iOS mobile apps (“in-app content”). Apple imposes unreasonable and unlawful restraints to completely monopolize both markets and prevent software developers from reaching the over one billion users of its mobile devices (example., iPhone and iPad) unless they go through a single store controlled by Apple, the App Store, where Apple exacts an oppressive 30per cent tax on the sale of every app. Apple also requires software developers who wish to sell digital in-app content to those consumers to use a single payment processing option offered by Apple, In-App Purchase, which likewise carries a 30 per cent tax.” 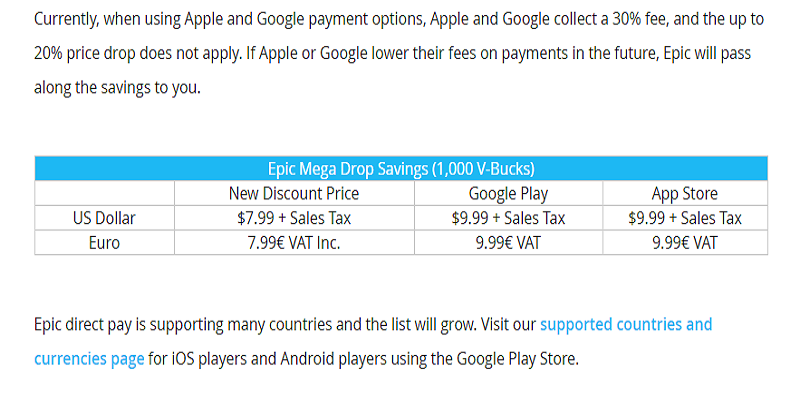 Epic also posted a video online mimicking Apple’s famous Macintosh ad from 1984, this time accusing Apple of being the bad guy instead of the hero. Epic also attacked Apple on social media, launching a campaign with the hashtag #FreeFortnite, urging players to seek refunds from Apple if they lose access to the game, and creating a parody of Apple’s famous “1984” television ad.

In a statement, Apple said Fortnite had been removed because Epic had launched the payment feature with the “express intent of violating the App Store guidelines.The fact that their (Epic) business interests now lead them to push for a special arrangement does not change the fact that these guidelines create a level playing field for all developers and make the store safe for all users,” Apple said in a statement.

“Apple is bigger, more powerful, more entrenched and more pernicious than monopolies of yesteryear. Apple’s size and reach far exceeds that of any technology monopolist in history,” Epic says in the suit.

Epic’s lawsuit against Google accuses the tech giant of abandoning its idealistic roots and says Android’s claim that it’s an open ecosystem is a “broken promise.”

“In 1998, Google was founded as an exciting young company with a unique motto: ‘Don’t Be Evil,'” reads the complaint. “Twenty-two years later, Google has relegated its motto to nearly an afterthought, and is using its size to do evil upon competitors, innovators, customers, and users in a slew of markets it has grown to monopolise.” Google declined to comment on the lawsuit.

Google spokesman Dan Jackson said in a statement,”While Fortnite remains available on Android, we can no longer make it available on Play because it violates our policies.However, we welcome the opportunity to continue our discussions with Epic and bring Fortnite back to Google Play.”