Disney+ has released the first official trailer and a new poster for WandaVision, slated to stream in December 2020. The one-minute trailer for the first Disney+ Marvel series looks weird but appears to be different from anything we have seen in the MCU till date.

Starring Elizabeth Olsen (Wanda Maximoff / Scarlet Witch) and Paul Bettany (Vision), WandaVision has been described as “half classic sitcom, half MCU spectacular,” and lives up to it in the trailer. The series, most-likely set post the events of Avengers: Endgame, features the superheroes in a weird new world of 1950s suburban America, in black-and-white 4:3 aspect ratio. 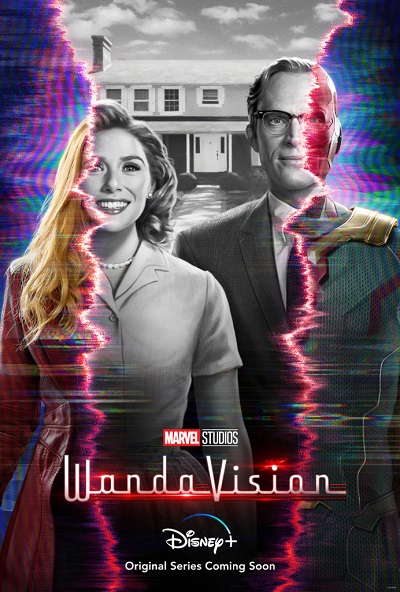 But the truth is not as it seems, as midway through the trailer, Vision is reminded that he’s dead (Avengers: Infinity War), while The Platters’ 1958 hit Twilight Time plays in the background.

It seems that Wanda and Vision are trapped in some kind of an alternate reality, and their domestic bliss is disrupted as inquisitive neighbours ask disturbing questions. A report suggests perhaps, Wanda has somehow transported them back through time but ended up erasing their memories. She still has her powers given the telekinetic movement of objects in the old-timey world, while Vision regains his old self in a more colourful world.

Besides Wanda and Vision, the trailer features a grown up version of Monica Rambeau  played by Teyonah Parris (introduced in Captain Marvel as the child of Carol Danvers’ best friend Maria; Kathryn Hahn as a the “nosy neighbour”; Randall Park as FBI agent Jimmy Woo (from Ant-Man and the Wasp); and Kat Dennings as Jane Foster’s (Natalie Portman) assistant Darcy Lewis from Thor and Thor: The Dark World.