Christopher Nolan’s science-fiction movie, Tenet is all set for a pan India release across theaters including IMAX screens in English, Hindi, Tamil and Telugu on 4 December 2020.

Veteran actress Dimple Kapadia, who stars in the film, took to her daughter, Twinkle Khanna’s Instagram page to announce the release. “I’m extremely delighted to announce the release of Christopher Nolan’s Tenet on the 4 December all across cinemas in India. It has been an honour for me to be associated with this project. The film has some spectacular action sequences, turns and twists that you can best enjoy only on the big screen” she said in the video. Later, Warner Bros. India too shared the video on Twitter.

The wait is over! Dimple Kapadia announces the release date of #TENET in India. pic.twitter.com/QHv9qgRmJa 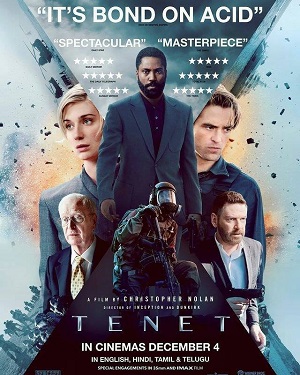 The official synopsis of Tenet follows: Armed with only one word—Tenet—and fighting for the survival of the entire world, the Protagonist journeys through a twilight world of international espionage on a mission that will unfold in something beyond real time. Not time travel. Inversion.

Tenet stars John David Washington, Kenneth Branagh, Robert Pattinson, Elizabeth Debicki, Kapadia and Michael Caine. Washington’s character, named The Protagonist, is given the responsibility of saving the world from World War III, and it is not Armageddon the world is facing, we are told, but something worse – a concept called inversion, a sort of communication with the future.

Tenet received mixed responses upon its scattered release in select theatres around the world. It grossed $350.8 million in the worldwide box-office market. The film was also shot in Mumbai last year for a few days, one of the locations out of over half a dozen scenic locations around the world.