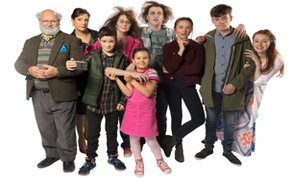 At MIPCOM 2017, Studio 100 Media has acquired international distribution rights for comedy series Drop Dead Weird (26 episodes 24 minutes) and live action comedy Random and Whacky(15 episodes 24 minutes). It is a Munich(Germany) based production and distribution company. Drop Dead Weird has been created by Sally Browning and Dean Cropp. The show targets kids from six to twelve years old. It is an Australian-Irish co-production by Ambience Entertainment, Air Pig Productions and Telegael.

Ambience Entertainment was founded in 1989 and is an award winning production company and industry leader specialising in entertainment content. It has feature film, television drama and children’s live action focused divisions.

Air Pig Productions is a Sydney-based company involved in all aspects of film and television production and co-production are currently into long and short-form programs, including factual one-offs and series, formats, children’s television and commercial content  for a variety of audiences worldwide.

Soon there will be a second series that is scheduled for 2019. The series premiered in September on Ireland’s RTE2 and launches  on 7TWO and KidsOn7 in Australia this October. The show’s theme is about an Australian family who have shifted to Ireland to run their family B&B in a far off seaside village.The twist in the story comes when the parents turn into zombies and the children are forced to accept this as well as hide this secret. Random And Whacky has been created by Monica O’ Brien.It is a fast paced series and teaches kids to explore their creative side. By the end of 2019, a sequel series is also in development. It will be interesting to see what’s in store!Studio 100 Media launched these shows in MIPCOM this year. It will be handling the worldwide distribution rights outside of the shows’ home territories.