For the last eight months, kids have been home bound owing to the global pandemic, putting summertime ‘masti’, back to school, spending time with friends, indulging in outdoor play, coming back home full of stories, to an abrupt halt.

Voot Kids, India’s first and only multi-format kids’ app, accredited by the Early Childhood Association, recognises that in all the ‘acchai’ (pros) of staying indoors and studying online, their ‘masti’ and the joy of childhood has gone amiss. So, this Children’s Day, 14 November 2020, Voot Kids,has launched a new campaign #UnmutetheKids to let kids voice their perspective. 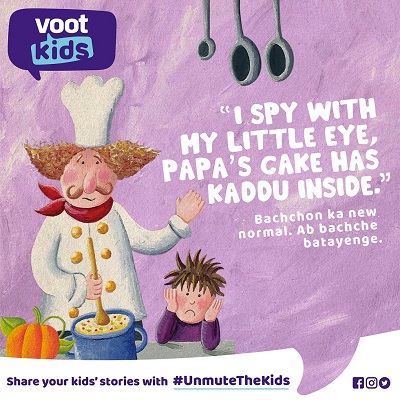 With the tagline of “Ab bachhe batayenge, bacchon ka new normal” – the movement calls for kids across the country to openly express themselves and share their views on what’s happening around them all these months. #Unmutethekids is intended to and set to bring these big, small voices centerstage.

Speaking about the campaign, Viacom18 Digital Ventures marketing head Vigyeta Agrawal said, “This year has been full of disruption for the kids and we wanted to give them an outlet to voice their side of the story. #UnmutetheKids is our endeavour to bring this conversation mainstream and we will keep building momentum on this, throughout the year via multiple initiatives.”

Kickstarting the campaign, Voot Kids is set to introduce a series of lighthearted and endearing brand films that speak through the lens of a child. Embracing innocence and honesty amidst the new normal, each film is thoughtfully created to capture moments in a child’s life reflecting at times their reality and at times, their parents’. The philosophy of unmuting kids, empowering them, bringing their stories forward and infusing ‘masti mein acchai’ in their lives, will be continued through the year with various initiatives that reflect the thought. This Children’s Day is going to be the start of a year that’s all about Kids.

The first adorable brand film observes a kid standing with a placard that says, ‘Aryan’s Bhook Hartal’ as he revolts against the ‘paani wali daal’ cooked by his father, sharing the message of ‘Ab Hum Bolenge’. Continuing with the message, the second film, again through the eyes of a little girl, who has been confined in her home, rebels against the locked parks and playgrounds. 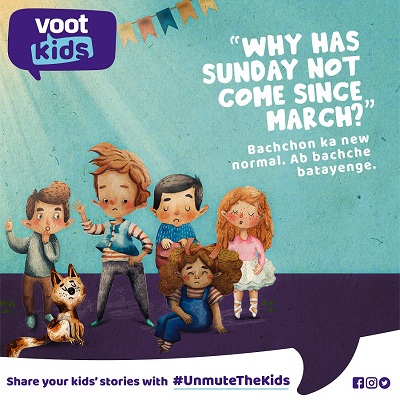 Adjusting to the new normal of work from home, the third brand film showcases a little boy who is stopped from making noise in the house while his mother is on an important work video call. With a purpose in his eyes, the little boy is determined to now expose his mother’s secrets, highlighting the message of ‘Ab Hum Bolenge’. Further in the fourth film, making an unpleasant face after being told to drink a kaadha (health tonic), the kid amplifies the message of ‘Ab Hum Bolenge’.

With the #UnmutetheKids campaign, Voot Kids aims to give voice to the young ones by encouraging parents to tweet or send videos or pictures of the things their kids say, while living through this new normal. The campaign will be amplified through a 360-degree campaign including TV, YouTube, Facebook, Instagram and Twitter, along with high impact influencers-led communication that makes a clarion call to #UnmutetheKids.