Disney+ has dropped the trailer and poster of brand new film, Flora & Ulysses, featuring a superhero squirrel, streaming 19 February onwards on the platform.

The super-fun, one-of-a-kind, hybrid CG movie from the House of Mouse owned streaming service, is adapted from an award winning children’s book of the same name by Kate DiCamillo. Flora & Ulysses’ cast is full of comedic talent from the world of TV, both behind and in front of the camera. 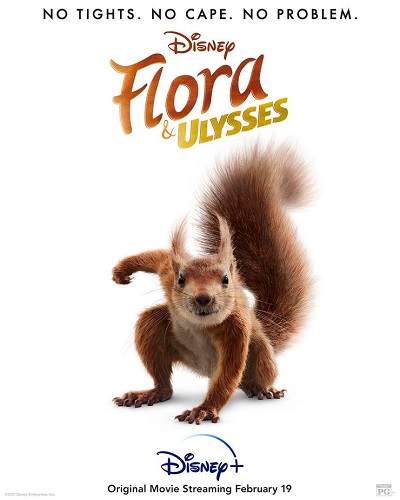 With a screenplay written by Brad Copeland, the cast includes Alyson Hannigan (How I Met Your Mother), Ben Schwartz (Sonic the Hedgehog), Bobby Moynihan (SNL), and Danny Pudi (Community). This is the second directorial from Lena Kahn, whose debut film The Tiger Hunter was well received after a limited release.

Beside these noted names, child actor Matilda Lawler plays Flora, a comic-loving girl who adopts a squirrel that just happens to have super powers. The official description follows: Flora & Ulysses trailer from Walt Disney Studios shows Flora discovering her pet’s abilities via a message left on a typewriter, in which it names itself Ulysses, and other footage reveals the rodent has some classic powers. Flight? Check. Super strength? Most likely. Human speech? Not exactly.

While films like Mulan and Artemis Fowl were created for the big screen and later released on Disney+ owing to the pandemic, Flora & Ulysses is unique and was created for the subscription model of the streaming service. One of the reasons the company chose the film for Disney+ was its focus on family viewings, as associate producer Jennie Lee revealed to Cinema Blend.

“This way, you can watch it again and again. This particular story I think speaks to many age levels. If your kid’s five or 15 or even other adults at home. Everyone can watch it. Everyone can find something they identify with. So, I think it’s going to be great to just watch as a family when you’re at home, hanging out, many times in a row,” she had said.