14 November 2020 marks the 40th anniversary of the beloved kid’s magazine, Tinkle Comics. The comic magazine was an idea of then Amar Chitra Katha associate editor Subba Rao and was launched by its editor Anant Pai and a 12-year-old schoolgirl Elaine D’lima on 14 November 1980.

“Tinkle has been an awe-inspiring journey of countless stories: the legends who laid the foundation of Tinkle, the many talented writers and artists who poured their imagination to take us to new worlds, the fascinating characters both old and new, and the generations of readers for whom Tinkle is a treasured friend, me included. This year just shows the enduring nature of this beloved magazine,” said Tinkle editor-in-chief Rajani Thindiath.

Celebrating the prominent landmark, Tinkle is celebrating this year with the anniversary e-weekly on the Tinkle app. This includes a jigsaw puzzle created especially for the anniversary. There will also be the sixth Tinkle Awards where kids get to vote for their favourite stories and characters.

Tinkle will have a live event, Tinkle Day, on 13 November, featuring four most active Tinkle readers and Rao along with a guest appearance of everyone’s favourite Suppandi. The event has been designed to be fun to reflect the spirit of Tinkle, so there will be games and fun debates about the Tinkle Toons. The event will be hosted by Tinkle group art director Savio Mascarenhas and Thindiath.

“I’m also delighted by a happy coincidence, Tinkle completes 40 years in 2020 and I’m in my 10th year as its editor,” added Thindiath.

A live quiz show, the Tinkle Game Show hosted by the funny Aparna Sundaresan and Devika Soni from the editorial team will make another fun session on 14 November. Special guests for the event will be Mascarenhas, Thindiath, illustrator Abhijeet Kini and Suppandi. The show is being hosted on Tinkle’s Suppandi and Friends YouTube channel. 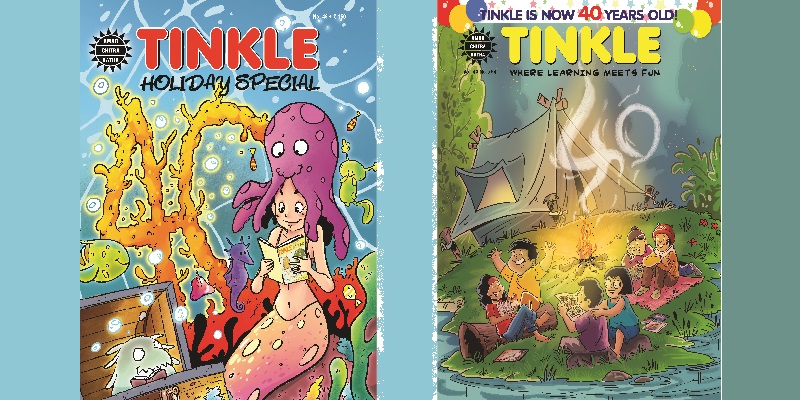 The brand is providing 50 per cent off on all Tinkle titles on the Kindle store. This is some great opportunity to go back to your childhood along with your kids and enjoy the nostalgic comic affair. Tinkle has been a favourite amongst not just the young and old, but also Alexa (Amazon’s smart speaker) who will be wishing Tinkle on completing tinkling and sparkling 40 years!

“Tinkle is a rare children’s magazine that has stood the test of time. It has continued to entertain, engage, and enlighten multiple generations of children for over 40 years. On this special occasion, we, the entire team of Amar Chitra Katha, feel honoured and blessed to be the ones holding up the Tinkle torch, keeping this piece of national heritage and one of our founder Mr Anant Pai’s greatest works thriving,” said ACK president and CEO Preeti Vyas.

Tinkle also went phygital (digital plus physical) with e-weeklies appearing on the App from June 2020, including videos, vlogs, and interactive games and puzzles.

The kid favourite brand is also launching the Tinkle Gold physical edition: a 192 page collector’s edition featuring the best of the best stories from April to October this year and Holiday Special 49.