The Second Annual Indian Comics Convention is all set to entertain Indian audience for 3 days packed full of Action and Fun at Dilli Haat, from February 17 – 19, 2012 between 12 noon- 8pm. There will be over 20 book launches, tons of merchandise, costume contest, world renowned guests taking special sessions and a lot more to look forward to. World renowned International Artist Robert Crumb; who is one of the top 10 most influential artists of the last century will be coming along with his wife Aline Kominsky-Crumb, a comic artist herself. Aline Crumb on behalf of both her and Robert Crumb sent a message saying, “This is my third trip to India, but I’ve never been to Delhi before. We’re both very excited, and honoured to be invited to the Comics festival!” Gary Groth, a renowned American comic book editor, publisher and critic, also, Editor-in-Chief of The Comics Journal and Co-Founder of Fantagraphics Books, and Chris Oliveros, the Founder of one of the largest independent publishing houses Drawn & Quarterly will be taking special sessions at 2nd Comic Con India too. “I’m honoured to attend Comic Con India and interview Robert Crumb, an artist I so highly esteem and one that it’s been my privilege to know and publish for 25 years now. This is my first trip to India and I’m very much looking forward to experiencing Indian culture”, says Gary Groth. Chris Oliveros says, “I am very pleased and honoured to be invited to India for the 2nd annual Indian Comic Con. I am looking forward to meeting attendees at the convention and, in particular, to learning more about the comics industry and its role in Indian culture.” 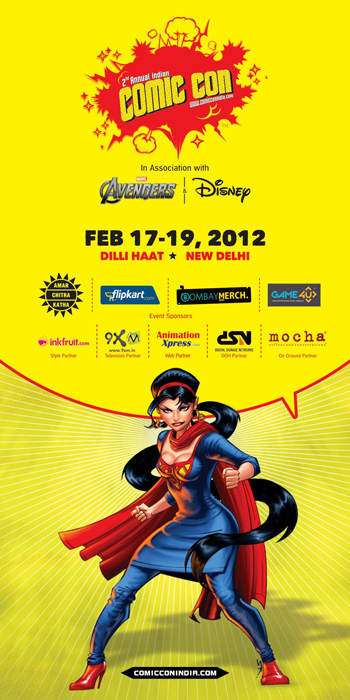 The event will have stalls exhibiting, promoting and selling comics, graphic novels, merchandise etc. There will be workshops and interactive sessions every half hour at the dedicated stage area with exclusive launches of Comics titles, more book signings, competitions and Cosplay. “Fans and Visitors will surely have a gala time. The Second Annual Indian Comics Convention will boast more participants than ever before from the comics, publishing, merchandise, toys/games, animation and films industry. We are extremely fortunate to have speakers – from the legends of the Indian Comics Industry, to veterans of the industry from outside the country this year”, says Jatin Varma, Founder, Twenty Onwards Media and Comic Con India. “Having Robert Crumb come for Indian Comics Convention is a dream come true for us and comics lovers. It is his first visit to India and we are looking forward to having him at our convention”, Jatin added. Comic Con India is a unique event celebrating the illustrated medium, which brings together the whole comics industry and related fields such as Merchandise, Toys, Games, Films and Animation, along with fans of this culture from all age groups. connect@animationxpress.com