Gone are the days when comics only meant excitement and adventure from cover to cover, black words on pages, images and imagination running amok! This is the digital age and comic apps are very much in vogue!

AnimationXpress’ Comic Books & More (CBAM) Summit that was held on 9 and 10 April focused on this emerging pop-culture phenomenon and how COVID was a driving force.

“Stories are now what drives the market. The next gen audiences are looking for immediate access to stories/content at their fingertips and the transition from books to mobiles/tablets are a product of time. The Internet and social media are major reasons for this shift,” noted Tapper. 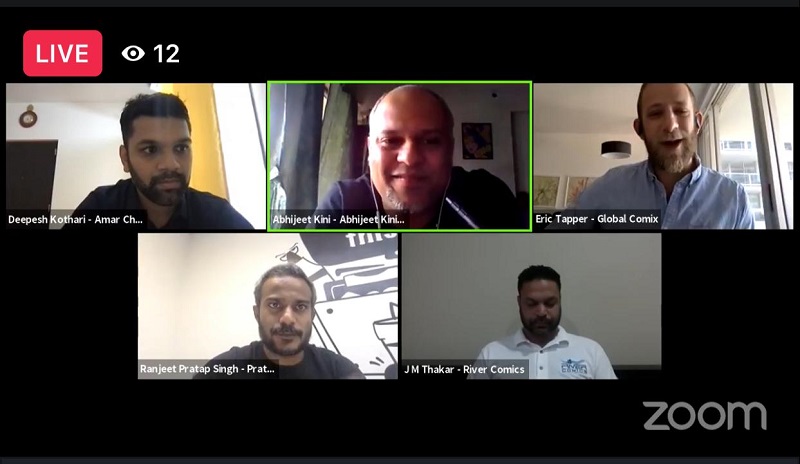 The speakers further mentioned how the digital platform can be leveraged to further expand the comic book industry and in fact revive the fiscal and traditional industry.

Singh stated, “Digital and print are not opposite but complementary to each other. The platform is going to further expand and bring a revival for the traditional comics market. Building a true community and true fans will reach out to thousands more. Hence building a strong distribution network  is very important that’s easier through digital platforms.”

With the COVID-19 outbreak, and publications being hit, digital comics stepped up to the rescue for many. Indian Comics industry is still a niche industry even though the talent pool available is massive. The inflow of money is bare minimum and most artists have a day job to survive and keep their passion running.

Thakar added, “The pandemic has impacted the transition from books to apps in major levels and we [River Comics] have been no exception. The River Comics App has really helped us stay afloat in generating revenues, more sales (through subs) and other aspects.”

Kothari shared, “During the initial lockdown, we ran a campaign and gave our entire content library for free for the first month. The experiment was hugely successful and the habit formation resulted in revenue numbers. The response has been phenomenal and the audience wanted more and more. In fact ACK content even works better on Pratilipi than our own platform, so cross-platform publicity has also been extremely satisfying for us.” He also spoke highly of the River Comics App – its interface, readability,  graphics, and motion comics that have been a driver of more eyeballs towards it.

Kini exclaimed that while digital is the new norm, print is going to stay and both are going to co-exist, because content is eventually the king and good content will find its way out. “It’s great that all creators have been given a platform where comics are getting a wider reach digitally.”

However, with pros comes cons. The panelists also focused on the challenges that the platform comes with. “The challenges vary. Technology is what Pratilipi is well accustomed with but we’re starting to get the ‘hang of marketing’. For us at times, lack of content and retention of users become a challenge.”

Kothari agreed with Singh on the retention of subscribers with a constant flow of quality content at regular intervals.

Tapper quipped as a suggestion/solution, “It has never been easier to find a community, but with the internet, immerse yourself in. Build a community. Build google alerts, use social media and you’ll find the support in surprising places.”

As parting words, Thakar concluded, “Don’t give up on your content if it’s good enough. If you have the talent to produce it, there are free sources to put it out there. We’re still in our infancy and it’s a long ride, but don’t give up on the dream.”