Diwali 2020 came in with a power-packed treat for kids from POGO, as the channel launched Smashing Simmba, inspired and adapted from Rohit Shetty’s famous cop franchise, Simmba.

Co-produced by Rohit Shetty Picturez and Reliance Animation, Smashing Simmba follows a fun-loving prankster, Simmba, with endless tricks up his sleeve. He spends his days nabbing villains and miscreants along with his friends Ricky and Kittu Khabari. Simmba finds himself on exciting adventures which perfectly represent his catchphrase, ‘Mind-ich Blowing’.

Speaking to Animation Xpress about the new aspiring cop on the block, Reliance Animation COO Tejonidhi Bhandare mentioned, “We have been the pioneers to bring Bollywood to animation and create character based animation shows [Little Singham for Discovery Kids] based on established live action IPs. The idea originated from the quirkiness of Simmba. We were confident it would work wonders in the animation arena, and that’s exactly what we pitched to POGO.”

Post launch, the response for Smashing Simmba has been quite decent. POGO launched 13 half-hour episodes and Bhandare informed, “50 odd episodes are in production [for which] the animation is done in 2D Flash.” The Smashing Simmba IP is owned by Rohit Shetty Picturez and Reliance Animation is the co-creator of the animated version.

Commenting on the comparisons and pressure of meeting expectations as its previous Bolly-inspired-animated IPs [Little Singham, Golmaal Jr.] were huge hits, Bhandare said, “It was nothing less than a roller-coaster ride! We speculated about the comparisons that might be drawn from the other shows that we have created. The challenge was to make it different from Little Singham and give this show its own fresh identity. The entire credit of this show goes to creative director Vikram Veturi and content head Ruve Narang who creatively brought all the nuances, along with the lead writer Yash Thakur.” 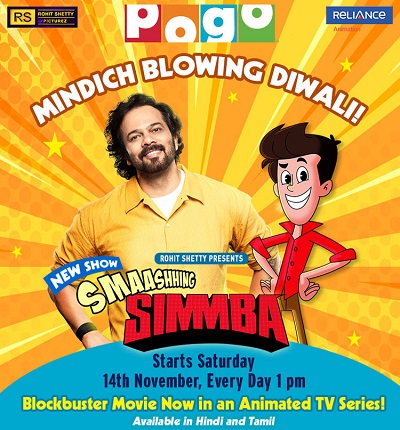 Both Veturi and Narang played pivotal roles from ideation to execution, and Narang is now heading towards helming the project as the director. Line Producer Rajesh Bhosale too has done an excellent job in making sure that the animation studio meets its deadlines and are ready with deliverables on time.

Sharing about the process of ideation and execution, Bhandare added, “The ideation stage was probably the most complex to crack as we already had a similar property in the category. After months of brainstorming with the team we finally chalked the character, his world and his quirks. The process of creating the antagonists was fun! The writers then effortlessly went on to weave all these amazing ideas into scripts. The animation process had an added challenge due to the COVID-19 crises. I can’t be more proud of our team working virtually, giving their heart and soul to the show.”

The production team is presently focusing on TV episodes but as Bhandare noted, they’re willing to make tele-features as well. “The scope for Smashing Simmba is huge, and the future looks exciting,” concluded he.