Ghost Animation is surely on the global map of animation, and that’s a proud moment for Indian Animation. Two days ago, we reported about Shaheen Sheriff (from the Ghost team) winning the  ‘Best Foreign Comedy’ at San Francisco Indie Shorts for Watchmaker At Time’s End. Here are more details as promised!

An elated Sheriff shared with Animation Xpress, “I’m very glad that Watchmaker got selected and finally won because that’s what finally convinced my parents that their son is doing something serious, and not just a time-pass (laughs). Their happiness matters, and I consider that to be my biggest win.”

Animation Xpress continued the candid chat with him to know more about the animated short that’s one of a kind. Here are the excerpts:

Congratulations on the win! Were you by any chance inspired by Salvador Dali’s ‘The Persistence of Memory’ for creating Watchmaker? I actually found an uncanny resemblance with it.

This is the first time I heard of this connection, but Dali wasn’t an influence. The origin of the story was very technical – we had a 3D course in college and had to come up with story concepts. I thought of a story that would let the advantages of 3D shine. It’s easier to make dynamic lights and shadows in 3D than drawing in 2D frame-by-frame. So I focused on that, wondered how people’s lives would be affected if day and night (light) keep changing erratically, and came up with the concept.

So if Dali wasn’t an influence, were you inspired by someone/something else?

Around that time, I was reading the graphic novel Watchmen by Alan Moore and Dave Gibbons, in which one of the main characters – Dr. Manhattan’s father was a watchmaker, and there’s a meteor shower too. So, those things running around in my head influenced the stories I was writing.

I’m a foreign filmmaker now! Won ‘Best Foreign Comedy’ at @sfindiefest for ‘Watchmaker at Time’s End’!! . There are several frames like this in the film where the character’s joints are broken for a split second just for feel, and hopefully not visibly noticed. These are very fun to make, and even more fun to see how much you can get away with! . #animation #animatedshort #watchmakerattimesend #filmfestival #officialselection #shortfilm #selection #indiancinema #indiananimation #independentfilm #kerala #thrissur #kolkata #india #malayalam #ghostanimation #laurel #art #digitalart #krita #madewithkrita #blender #b3d #sanfrancisco #sfindiefest #comedy #foreign #breakingjoints

The concept was eventually rejected. But a year later, when I had to make a film, I still fondly remembered this concept. Since animation is a very time-consuming process, I had to choose a topic I wouldn’t get sick of immediately. Since this story stuck around successfully for a year, I thought it earned its spot to stay in my life for a while longer. And I started making it.

Can you take us through the process of ideation and animation?

I worked on the story for a long while; adding, removing and shuffling around characters and situations till I could get something which worked. Showing animatics to people and getting their feedback helped a lot, especially in knowing what parts weren’t working, and finding the core to focus on.

Since I was setting it in my hometown Kerala, research (going home, walking around, talking to people, living life, conversing with watchmakers while they worked) helped a lot to set the tone. My friends from my district – Vishnu Chandran and Kiran Ravindran, who lent their voice played a huge role in getting the authenticity right. 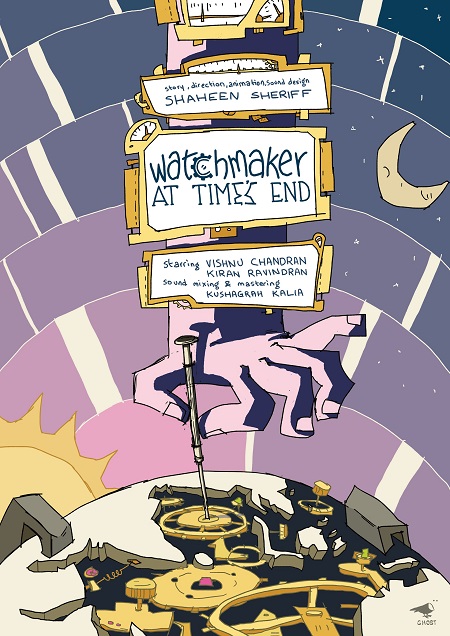 For the animation, I thought of making it a 2D-3D hybrid, using the advantages of both. I wanted to make it feel like my sketchbook drawings in motion, but with realistic lighting.

What software did you use and how much time did it take you to complete it?

The entire film from pre-production to post-production and sound were all done using only free open-source software. I knew very little about them and did many tiny looped animations to figure them out. The process kept getting modified throughout the production based on the needs of the shots and advancing technologies. The film was basically a testing ground in which each shot was about learning something new.

It took me around five years to finish the film as I wasn’t working on it continuously. Life happens, and I need to earn to survive. So I was doing a job and freelancing. We set up a studio, and several other events happened along the way. Whenever I could, I made some time and worked on the film, progressing it slowly but surely. I somehow didn’t get tired with the film throughout the years, even though I kept suspecting that I eventually would. It was always a fun project that I loved returning to.

How many official selections and wins have you bagged till date? How was the response?

It’s been selected at 11 festivals so far and bagged two wins. Watchmaker got a wider audience and great response since most festivals are online due to the pandemic.

How was the experience and response of the film at First Flight screenings across the country?

Had it not been for First Flight, I suspect I would have still been working on Watchmaker. The film production went into overdrive and got completed last year majorly because we had already promised people that we’ll be screening this, and people actually bought tickets to watch. So there was no option but to give the audience the best product we could possibly make for the faith they showed in us.

It was some of the best months of last year, travelling all across the country, meeting lots of lovely people from so many backgrounds, and interacting with them. This film was quietly being made in the dark for personal joy all these years. So, to physically see people laugh and enjoy it suddenly was a very emotional experience. It showed us firsthand that there was an Indian audience for animated films. We held sessions about what goes into making these films and hopefully got a conversation going on the possibilities of the medium.

What are your upcoming and current projects?

I’m excited by all the potentials that the union of technology and art has to provide. Currently, the major new project I’m making is a 2D animated video-game. Seeing your animations react according to your inputs is a very fun experience. It’s heading in a positive direction and I am gathering a real dream team to make it happen. It’s a story that’s very resonant with me, about learning how to emote and keep in touch with friends.