Vaibhav Studios has added more feathers to its cap! The animation studio, best known for Lamput, swept away most number of awards at the Promax India 2020 and one award at the Venice TV Awards for its funny, whacky and captivating idents for Nickelodeon.

Helmed by founder and animation veteran Vaibhav Kumaresh along with his team of talented animators/directors – Ajit Aher, Dapoon Rai Dewan and Anand Babu, the Nick idents bagged four awards at the Promax Global Excellence Awards in Los Angeles and a whopping 12 awards at the Promax Awards India in 2019.

Commenting on the same, an elated Kumaresh shared with Animation Xpress, “I’m delighted and want to congratulate our entire team, especially our directors and animators Aher, Dewan and Anand. The animated ident campaign that we created for Nickelodeon India are doing great at the awards. The sole intention behind conceiving and pitching this ‘handmade’ campaign was for us to detox from the increasing digital projects we had been working on for a long time! I’m glad Nick India bought our idea and paid us to have fun! The campaign was truly refreshing for us, and we’re glad that the fun continues even now!”

Here’s the full list of awards won by the animation studio:

Best Ident (Out of House) 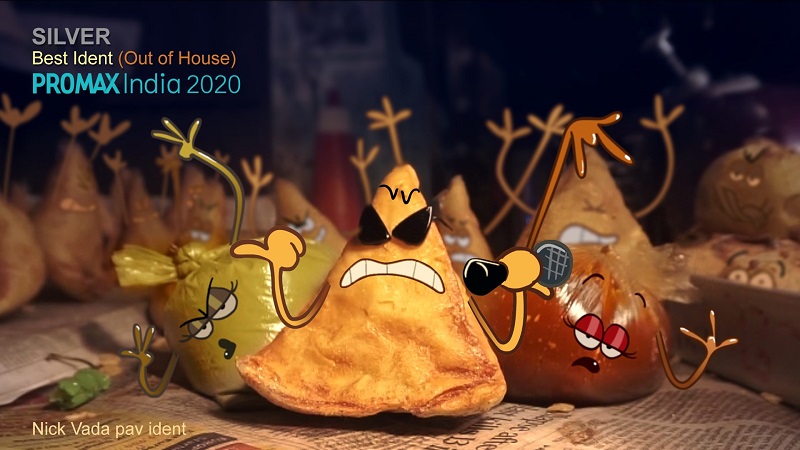 Best Ident (Out of House)

Speaking about the idents, Dewan commented, “This year has been amazing at the awards, just like last year. It is special for me because these films mark my debut as a co-director and a conceptualizer. It’s been an amazing learning curve where I needed to think of every aspect of filmmaking – be it the story, the storyboards, the set design, the model making, the animation, the lighting and even the music. Each of these areas were tremendous fun and will always be a memorable experience for me. I thank Vaibhav and the folks in my studio for giving me this opportunity. Also, special mention to Roto Shah, the music director of the Street food Rap [Vada Pav ident] and the Train [Valentine’s Day] idents, who single handedly created such catchy tunes for both the films!”

Shah noted, “It’s always good to see when your work is appreciated, awarded, and loved by fans. Nickelodeon has always been special for me as many memorable idents I have done for them, and that is only because of Kumaresh who has always trusted my work and approached me for them. Vada Pav Rap was also one of those fun moments to work on after ROCK ident. Kumaresh had shared a rough lyrics on the phone in his voice though lyrics were not final but his voice I just loved it and back of my mind I had decided to keep his voice for the final song even we added backing vocals for those sidekicks Dewan and I did the backing vocals. once everything is done then I sit back quietly in my den and do the detailing and adding more backing voices in the track to make it sound fuller. These idents seem really small but they are really difficult. the amount of work that goes into creating these songs is complicated and time-consuming.”

Kumaresh further mentioned, “For me the greatest fun is when we are collectively conceiving and producing the films. The amazing feedback from our audience coupled with awards globally is merely a byproduct of the fun we had. I’m sure there’s more to come! Also, special kudos to music composer Narayan Parasuram for directing multiple live musicians and composing a highly intricate musical track for the Garba ident. No wonder it won him the Gold for the best original music score.”

An equally excited Parasuram added, “I’m obviously very thrilled at the award sweep that the Nick Garba idents have won. I’m also happy that its music has been recognised. The music is very unique in its compositional form. It’s very traditional Gujrati folk Garba music and the entire 40 seconds track is completely acoustic. 10 to 15 musicians played it, from dhol to shehnai to jhanj and others;  no electronic programming, instruments were used. For that you need a very gutsy producer like Kumaresh as it involves more cost, more effort because you don’t sit with a laptop and download ethnic music. It could have been done that way, but the way we did it has a magic of its own. The magic is highlighted more as it’s based on an ancient Indian Raga – Brindabani Sarang and I’ve tried to bring that element in the contemporary, funky piece of snackable content on Gujrati food. So, it’s a ‘sangam’ of food and music of which the Gujrati culture is very passionate about. Thanks to Kumaresh for giving me this opportunity.”

The vocal track is sung brilliantly by Upaghna Pandya, a scholar (MA in Gujrati ) who lent her voice for Makdee songs as a child. She brought in the authentic, rustic Gujrati accent though the lyrics are mostly gibberish.