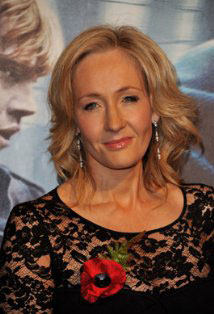 Singapore based media and entertainment house, Toonz Entertainment has enthralled the audiences and Harry Potter aficionados the world over with its 90 minute TV biopic “Magic Beyond Words”. The movie captures British writer J.K. Rowling’s modest upbringing and stint on welfare, follows her rise to fame and wealth as the author of the beloved Harry Potter children’s books.

The movie premiered on Monday, July 18 at 8:00pm ET/PT on Lifetime Channel, USA.

The film stars Australian actress Poppy Montgomery, best known as FBI agent Samantha Spade on the CBS series ‘Without a Trace’, as the literary legend.

P. Jayakumar (Wolverine and the X Men), Orly Adelson (The Good Witch), Jonathan Eskenas (Fab Five: The Texas Cheerleader Scandal), Steve Stabler (Dumb and Dumber) and Emmy Award-winner Paul A. Kaufman (Sins of the Mother), also director, are executive producers. Karine Martin (The Moth Diaries) and Ronald Gilbert (The Twilight Zone) serve as the producers, from a script written by Jeffrey Berman (Naught for Hire) and Tony Caballero (Crime Stalk), based on a biography by Sean Smith.

“This is about a woman who decided to persevere, to keep on with her dream. She was on welfare and she really hit rock bottom”, says Kauffman.

“It is an inspirational story of one of the most celebrated authors of all time, one that would pave the way for many aspiring writers. We are excited to be associated with such a landmark project and are quite hopeful of a positive response from the audience”, said P. Jayakumar, CEO, Toonz Group.

The J.K. Rowling Story dramatizes the British author’s struggle to bring the beloved wizard fantasy of Harry Potter to life as a single mother on welfare and become one of the world’s wealthiest women, with more than 400 million copies of her visionary books sold across the globe resulting in a billion-dollar film franchise.

The film is an inspiring look at a woman’s rise to become one of the most influential writers ever – from her humble beginnings as an imaginative young girl and awkward teenager to the devastating loss of her mother and the genesis of the Harry Potter phenomenon in her early twenties. The rags-to-riches tale also follows Rowling’s tumultuous first marriage, becoming a mother, her divorce, and the dark days of living on government assistance while publisher after publisher passed on her first novel before it became an international best-seller and solidified Rowling’s rightful place in literary and cultural history.