‘Come on girls, queue up in a single file and head to the computer lab,’ was a line my school teacher used once a fortnight.

In the not-so-long-ago school days, kids had the ‘privilege’ to access the computer (minus the internet connection of course) for just an hour a week or sometimes a fortnight.

Today, it’s a world away from all that. Tech-savvy kids are now in abundance and many a tween probably knows the whole kit and caboodle surrounding the worldwide web (WWW) far more than their parents.

This is an opportunity that kids’ channels are logging on to big time.

Kids are now extending their enjoyment of TV viewing by finding their favourite characters and games on the channels’ websites. No children’s TV channel is without its corresponding web world brimming with games, contests and the paraphernalia that kids are interested in.

While from the leaders in the space, Cartoon Network, to the homegrown Hungama TV, everyone is vying for maximum eyeballs on television; they are also doing so for mouse-clicks!

Oftentimes, the URL of the website is flashed on the channels during commercials or during a contest promotion. taking it even further, Nick’s on-air channel ID has its website URL as a permanent fixture.

Turner’s two channels Cartoon Network and Pogo have separate websites – www.cartoonnetworkindia.com and www.pogotv.com; Disney India’s website www.disneyin.com has microsites for the Disney Channel and Toon Disney. Hungama TV’s website is called www.hungamatv.com. Animax and Nick are the two channels that don’t have an India-specific website. These channel’s websites – www.animax-asia.com and www.nicksplat.com – cater to the Asian region. 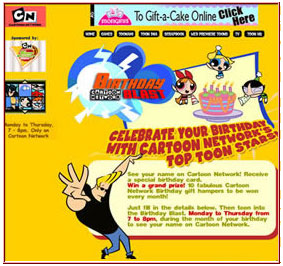 According to Hungama TV programming head Zarina Mehta, “The site aims to create a parallel medium to reach kids. This means that the content has to be more broadbased and has to move a few steps beyond the scope of the Hungama brand. The critical factor in executing the above is to ensure that the integration between online and on air content is seamless. All our on-air and on-ground event sponsors automatically get a online presence. We are also looking at developing specific properties to cater to certain advertiser requirements. All priority one shows will have an online add-on component and this would be promoted through the website.”

“Animax’ website has TV schedules, synopses of shows, as well as cool online activities like trailers of upcoming shows, celebrity interviews, streaming of music videos (either Animax’s own music videos or soundtracks from the current anime titles on the channel), as well as contests,” says Animax Asia vice president programming Betty Tsui.
Unique Nick Quotient
Nicksplat.com was launched in July 2004. Since then, some significant trends are:
1)

Walt Disney Television International (India) director marketing and communications Tushar Shah opines, “Since launch, all the contests that we had on both our channels have been linked back to the websites. The websites have been used as one of the entry mechanisms for all contests. In fact, for the Kim Possible Code Tod contest, we had more than 57,000 entries through the Disney Channel India website alone.”

Birthdays are a major hit with kids and hence it is very much on the kids’ channels radar. Cartoon Network too has a property called Cartoon Network Birthday Blast, which is promoted on the website.

Nick also has its birthday special. “We allow kids to enter their birthdates on SpongeBob Birthday Bop page and SpongeBob will wish them a happy birthday on-air during their birthday month,” said Tan.

Disney makes it a point to integrate the website in all their marketing endeavors. “Birthday Bhoot, our on-air birthday property, has a website leg as well, as did the Tarzan Jungle Josh Contest and so on,” points out Shah.