Independence Day of India is being celebrated with grandeur and fervor by kids’ entertainment franchise, Nickelodeon this year under its initiative #SochKaroUpgrade.

This week-long campaign intends to throw light on environmental issues we are facing today and the simple ways to bring about a change to better our future. 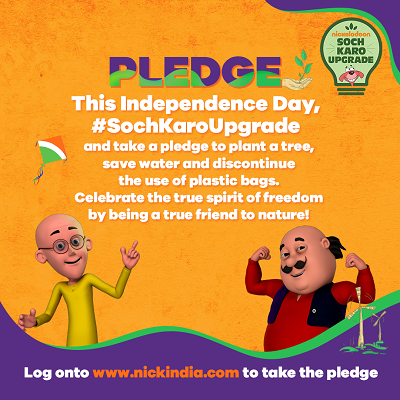 Homebound, people have realised that we have taken the gift of mother nature for granted. The campaign actively seeks individuals to take the pledge along with the kids broadcaster to protect nature and lists three commitments – planting a tree, discontinuing the use of plastic bags, and saving water.

The Nicktoons bring the message of #SochKaroUpgrade in a light hearted yet impactful manner through its films. The franchise is extensively promoting the campaign on-air and on digital with promos and through an array of activities to drive awareness on steps to bring about a change.

A popular doodle artist Woodledoodledesigns also did a series of graphic illustrations to drive the message to social media audiences. To extend support to this initiative, influencers and child celebrities including Riva Arora, Ruhaanika Dhawan, to name a few, will pose as eco warriors and take the #SochKaroUpgrade pledge.

Child-actor Dhawan, commented,” It is very important for everyone to have clean water and a green environment. Mother nature has been so kind to us in so many ways and now it is our turn to give it back. I have been constantly trying different ways to reuse plastic milk covers as plant pots and use the water that drains out from the air conditioner. In fact, I have been urging my friends to come forward and opt for ways to take action against climate change.”

Aakriti Sharma further added on the undying issue of climate change, “People across the world don’t realise how serious climate change really is and they take it very lightly. Now, that we learn about it in schools and also witness it when we see trees catching up fire due to global warming and the water level in oceans are increasing with every passing day; it’s becoming scarier and an issue to be spoken about. But our generation will be the one to hopefully correct all the wrongs that were being committed in the past. At home, we have switched to cloth or jute bags instead of one time use plastic bags and we urge everyone to take a step towards saving mother nature. We want people to know, just because climate change is not going to affect you in the future doesn’t mean it’s not going to affect ours. To contribute to this situation, I along with my friends and family will come forward and take a pledge to save mother earth.”