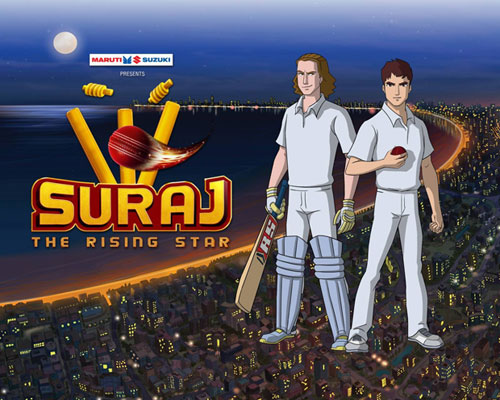 Cricket is perhaps the only sport that enjoys unparalleled attention in India. In a country, where the sport is a religion, it is every young boy’s aspiration to be the idol leading a team to its victory.

Suraj: the Rising Star ’, an Indian TV adaptation of “Kyojin no Hoshi” (Star of the Giants), a baseball manga and anime TV series that captivated Japanese boys in the 1960s and 70s, is clearly rooted in the culture of the Subcontinent.

The new animated show was recently launched on Sunday, 23rdDecember, 2012 at 10am on COLORS, one of India’s leading Channel.

This collaborative effort brings together content creators such as KODANSHA Inc., TMS Entertainment and DQ Entertainment to mark the 60th anniversary of bilateral ties between India and Japan. The show is an amalgamation of Japanese technology and Indian Culture.

A trailer of the animated series was also shown during an unveiling ceremony in New Delhi on Dec. 4. 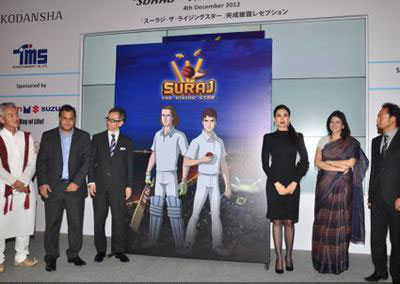 “I hope Indian people will love and embrace (the anime work),” manga artist Noboru Kawasaki, who penned the original Japanese series, said at the unveiling ceremony.

The scripting and storyline has been converted according to the Indian sentiments by Kodansha. Many details of the story closely follow the original. Hyuma Hoshi, the main character in the original, is replaced in the Indian adaptation by a boy named Suraj, who grows to be a star cricketer and the hardships and challenges he faces towards attaining this goal, highlighting common characteristics like the importance of family ties, friends and a ‘never say die’ attitude. 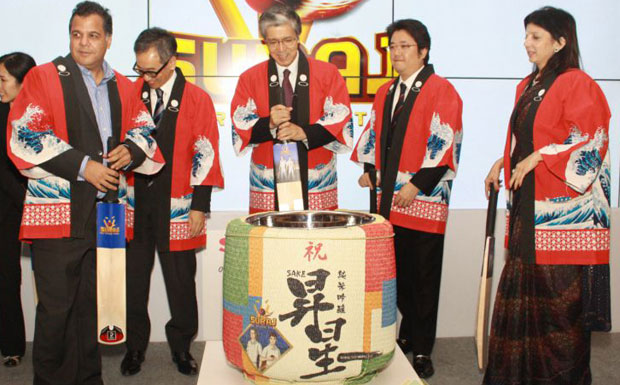 Kodansha Co., publisher of the Japanese manga series, and TMS Entertainment Co., producer of its anime adaptation in Japan, worked with an Indian anime production company for a period of 5-6 months on the Indian adaptation, which will air in 26 episodes each lasting 30 minutes. The entire production is executed at DQE office in Hyderabad.

Speaking about the show, Yoshio Irie, VP and Board Member KODANSHA Inc. says, “India and Japan have shared a remarkable relations for the past 60 years. ‘SURAJ-THE RISING STAR’ is our endeavour back home, to pay due respect to this long standing bond between two culturally and technologically rich nations. We are proud to create content that has the ability to directly connect with the common man in India, with partners who foresee our vision. Set with a common goal, the show will touch upon the importance of determination and taking on challenges in real life. Our creative team eagerly awaits the Indian audience’s response on this new outlook of entertainment and drama, custom-made for Indian viewers.”

Raj Nayak, CEO, COLORS says, “Suraj – The Rising Star marks a step towards strengthening the Indo – Japan cultural relationship by amalgamating Indian culture and Japanese technology. We are proud to partner this relationship and help spread the message to the larger audience. COLORS have always presented audiences with variety entertainment that includes unique content that caters to adults, families as well as kids. And now, with this show, we have done yet another first and extended our offering by foraying into a new genre using animation for story-telling. The series will present viewers an inspiring story of a young boy who dares to chase his cricketing dream. We are positive this will resonate with our audiences and is apt for a Sunday morning primetime 10 am time-slot.”

“It is an interesting experiment on our part, such a concept hasn’t been explored on a General Entertainment Channel and we hope the audiences like our work. It has been a wonderful experience working with DQE andKodansha on Suraj and we hope to collaborate soon in the future again.”

Speaking about the show, Mr. Manohar Bhat, Vice President (Marketing), Maruti Suzuki India Limited, says, “Our partnership with ‘Suraj – The Rising Star’ is in line with Maruti Suzuki’s vision to connect with the young and dynamic India. It is targeted at youth and relates to Cricket – a strong link between youth and India. It shows the importance of determination and taking on challenges in real life. This is exactly what Maruti Suzuki is about. We are sure kids and families will enjoy this TV series and connect with the characters.”

Tapaas Chakravarti, Chairman & CEO of DQE Group, says, “We are very proud with our collaboration with KODANSHA and TMS Entertainment on this exciting show. We are sure kids and families in India will really enjoy this TV series and be able to relate with Suraj’s struggle to reach for the stars. We are honored to be associated with our Japanese partners and in being a part of strengthening the India – Japan cultural and economic relationship.”

‘Suraj: The Rising Star’, presented by Maruti Suzuki has been aired on COLORS, one of India’s leading Channel yesterday at 10am. The show is also sponsored by other leading Japanese companies such as All Nippon Airways, Kokuyo Camlin, Daikin and NISSIN coming together towards culture unification of two countries.