Sesame Street in India has got its first four residents! 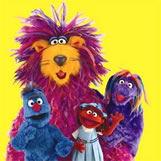 Moving a step closer to bringing India its very own localized version of the educational series, Sesame Street – Sesame Workshop, Turner and Miditech unveiled the specially developed muppets for the Indian series.

The four characters are named Chamki, Aanchoo, Googly and Boombah. The series is set to hit the airwaves in mid 2006 on Cartoon Network and Pogo.

Turner International Pvt Ltd India managing director Anshuman Misra said, “Turner has always been passionate about kids and with Sesame, our mission is to create innovative and engaging content that maximises the educational power of media to help children across India reach their highest potential. We are positive Sesame India, which is a collaborative effort of Indian, global and international experts like Turner, Sesame Workshop and Miditech, will reach the legendary heights in India as it has across the world. The series will become the benchmark in young kidsâ€™ education and entertainment and will be a milestone in pre-school programming.”

Elaborating on the production underway for Sesame India, Miditech president Niret Alva added, “Sesame India will be the country’s first children’s series that teaches and inspires, using humour as the foundation. Celebrating diversity and cutting across the rural urban divide, the programme will create a space where children feel free to explore, question, interact with adults, learn and grow in a non-threatening environment as equals. It will build bridges between regions, languages and cultures emphasising what unites children across India.”

Commenting on the development of content and characterisation of the muppets, Sesame India director, education and research DR Asha Singh said, “Through the cast of Sesame India muppets, we aim to address the ethnic and linguistic plurality of India. Folk stories, folk heroes, local stars, popular sport as well as Indian children’s common preferences form the backbone of fleshing out characteristics of the cast. Sesame India hopes to create an environment illustrative of organic cultural mixes for children to respect differences, live in harmony, develop awareness and learn to view community as an asset.”

Based on extensive research with experts like teachers, language specialists, artists, academics and others, each of the Indian muppets have Indian nuances both in their physical appearances as well as their personalities. In addition to teaching basic cognitive skills, such as literacy, Chamki, Aanchoo, Googly and Boombah will represent the vibrancy of India’s multi-culturalism and celebrate the similarities and differences that are a part of children’s every day lives.

Sesame India is home to inquisitive little Chamki – a five year old “ who is ever ready to explore the world around her with her never-ending questions. Chamki will stand as a positive role model for girls.

Her best friend is six-year-old Googly who is meticulous, an introvert and loves to read. Aanchoo, the storyteller, takes children to faraway places and different settings every time she sneezes. Talkative, bubbling with energy and an optimistic with a heart of gold, she likes to learn more about different professions and cultures and will address regional diversity on the show! Ever heard of a lion that is friendly, cuddly and loves to dance – that’s Boombah – Sesame India’s big cat, hailing from the royal family of Boombagarh.

In keeping with its commitment to reach rural and urban children alike, the Sesame India TV series would be followed by a long-term educational outreach campaign“ the materials and activities of which will reinforce the educational potential of the series and promote public awareness; preview key messages and ways children can benefit from the show; while providing tools and information on various platforms that are accessible to parents, caregivers, NGOs and educators.