Indian animation has been getting all the appreciation and acknowledgement it deserves, even for some amazing creative pieces from independent indie animators.

Some of the animators’ stories are no less inspiring than the stories they create. Arnav Roy Choudhury, a masters in Animation from IDC School Of Design, IIT BOMBAY, who is deprived from the sense of hearing since his childhood, is now a winner at Kosice International Monthly Film Festival (KIMFF). His first ever animated short film, The Open Window fetched him this award and is also officially selected at several film festivals. 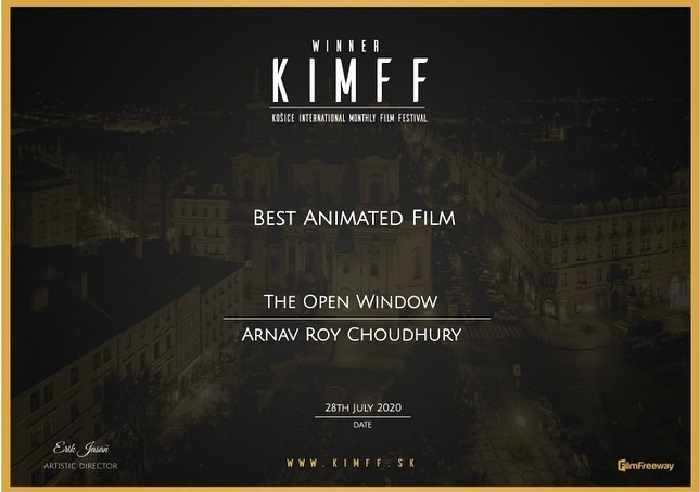 “I’m extremely happy for the ‘Best Animated Film’ award at KIMFF, as it is my first animated film. I have also received official selections at Prague International Monthly Film Festival (PIMFF), Florence Film Awards (FFA) and Jharkhand International Film Festival & Awards (JIFFA). I’m keeping my fingers crossed for these too,” an excited Choudhury shares with AnimationXpress.

Inspired from a real incident, The Open Window portrays the loneliness of an aged lady seeking companionship from the outer world in order to pass her time. This animated short depicts how after a certain age, our parents and elders get alone and seek some companionship from the outer world (that’s lacking in their inner worlds) in order to put a balm on their deserted soul. 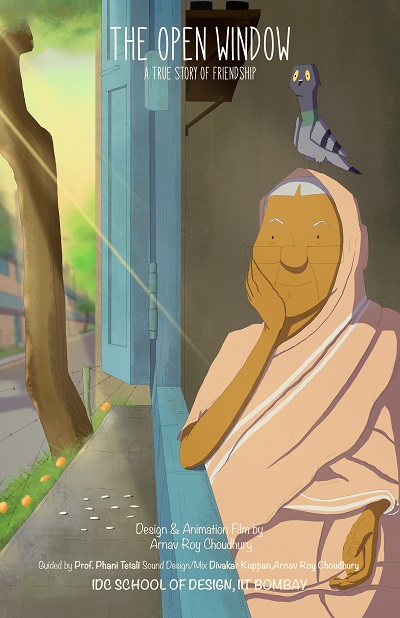 Choudhury informed, “I knew this old lady personally (Durga Mallick), mother of my art teacher (Subrata Mallick) who narrated an incident about her when I was a kid and it touched my heart. She passed away in November 2011 and I decided to work on the theme. Unlike my maternal grandfather who was fit and could walk due and be in contact with various people of his age group and spend his time, this lady was unable due to health conditions. So she would seek companionship in a pigeon.”

Choudhry, who’s hearing impaired since birth, grew up in Delhi and could not speak Bengali, Hindi, or English properly. His parents were not able to find a good speech therapist in Delhi, but they worked hard to improve his speech. As a child, he was attracted to cartoons, mostly Tom and Jerry, The Flintstones, and Popeye, and though he could not understand what was spoken, was attracted to the animated visuals. His mother then gave him a sketchbook, pencil, and eraser and thus began his journey, as he watched cartoons and sketched the characters simultaneously. Art became his weapon and he spent most of his early life sketching, painting, and slowly developing an interest in art and design.

He left Mathematics (Honours) and B.com (Honours) to pursue art influenced by his brother and accounts teacher. He got admission in College of Art, Delhi, but he was not interested in Applied arts and already started doing graphic design and sketching character design and learned to design on softwares, as the course had no scope of animation and graphic design.

“I appeared in the entrance exam (CEED and NID) for Animation film design and Graphic design programmes at IDC School of Design, IIT Bombay and NID, Ahmedabad and cleared both. I got admission at both IDC and NID in animation but was confused which to join as both of them are top-notch institutions. My parents then talked to the alumni of both institutes, and I was  inspired by Prof. Phani Tetali’s artwork on social media as well as Prof. Shilpa Ranade’s movie and joined IDC. I learnt many new things at IDC, the faculty was very helpful and the course provides many facilities to explore technology and design,” said Choudhury.

Choudhury did the entire animation of The Open Window by himself and it took him around 10 months to complete the film, using TVpaint for animation, Photoshop and Procreate for background, After Effects for composing and Premiere Pro for editing and sound.

His animation technique for this 2D film is simple yet draws attention. Part of his course curriculum for MDes in Animation film design, the story and technique of The Open Window was influenced by his art teacher Mallick. On seeking suggestions about a theme from family members, his mother reminded him of the story Mallick narrated and thus the film was brought into being. 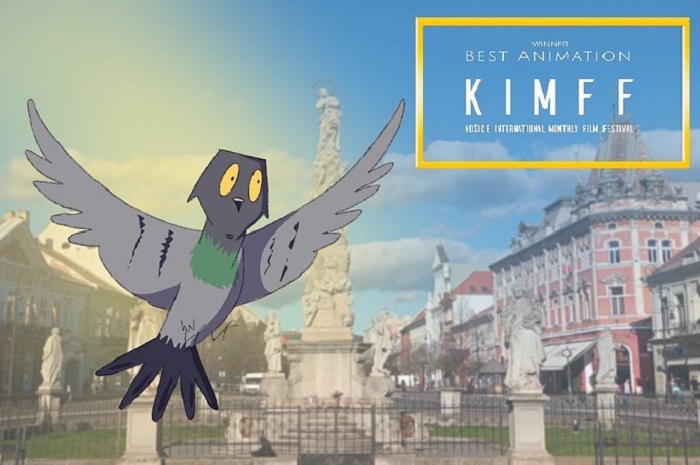 “I started with rough storyboarding, did my research on the story, sketched the characters, sheet modelling, took pictures on my phone, and shot reference video. I took feedback from Prof. Tetali, who shared ideas before I started animating and guided me throughout. Layouts were drawn from storyboards which defined the action and perspective of the scenes. The drawn backgrounds were simplified in style and took them to the next level by setting the detail through layout. I always got help from my parents, brother, and sister-in-law and three friends at IDC for short reference videos and dialogues for lip-sync, and any other help whenever I needed. Aditi Chitre had guided me with my film ideas. I always prefer to work on Tvpaint because it gives me the freedom to work in-between frames and create shots. These shots were imported in after effects, and the complete scene was composed of necessary treatments, camera moves, and colour corrections,” he explained.

Being a hearing impaired person, Choudhury had to struggle for each and every accomplishment twice than what a normal person would face. He joined IDC in 2018 and couldn’t perceive what the faculty taught him initially, as sound was alien to him, but Tetali taught him how to make a film and design a character, and mentored him. Shyam Wanare gave him a book for reference and Prof. Ranade too taught him animation principles. His seniors, Divarkar Kuppan, Abhishek Soni, and Anindita Mondal also helped him to understand the concepts for making a film and character sketching. Infact, Kuppan has done the sound mixing for the animated short.

“Sound plays a very significant role in my film, but I cannot perceive sound as good as others because of my hearing impairment. So, my senior Divakar Kuppan helped me to create different kinds of sound design. I have created a variety of sound mix tracks (natural indoor sound) and also collected sounds from the internet (freesound.org, youtube, and so on). My mother and brother helped in recording the dialogues in Bengali,” added Choudhury.

Overcoming hurdles, Choudhury now is tasting success and it’s just the beginning for him to soar high, proving that passion defeats everything. He has already started working on his next film and we wish him all the best.