Animation
Panelists make a strong case for co productions Few terms in animation could have as many varied meanings and variations as Co Production. Since most Indian studios are generally based on the services model, co production means going up the value chain, and most times this term is used for the value perception that it carries. For one, co producing may be foregoing production fees in return of Asia region rights of the show, for another, co production may mean co financing 50:50, doing pre production together and having an equal share in the backend. Whatever the variation of the co production agreement, the term at the very basic level hints involvement and collaboration of more than one partner and as such has its own advantages and challenges. In what was one of the most cohesive sessions within the animation track at FRAMES this year, panelists Hari Varma (Director – Operations, Toonz Animation India), Joan Vogelesang (CEO,Toon Boom Animation) and Hans Vander Sluys, (Executive Producer, Context Pictures, Canada) gave some clear, crisp and insightful tips and points on Co Producing in animation. The session was moderated by MEL CEO Rajesh Turakhia. Undoubtedly Co production has a lot to do with sharing of risk, investment, equity and so on but an interesting point that all the panelists drove in was that the content created would definitely have broader appeal, and be produced better, thanks to each partner contributing their strengths to the creation process. “It isn’t only about the funding benefits, its also about collaborating for better content” began Context Pictures EP Hans Vander Sluys. In a very specific and point to point presentation Hans presented a typical scenario when co producing with a Canadian Partner and what were the things to be kept in mind. “Development funding for ideas, stories and scripts must have broadcaster support in advance” remarked Hans. “Telefilm Canada has been funding Canadian TV & Film for over 39 years now and can fund upto 22% of the Canadian budget. One must know that the Canadian Broadcasters are all powerful and it is they who decide which projects get the funding. The projects have to find approval of Telefilm Canada too” he added. Hans also drew light to the need for proper Bridge financing as “Quite a few times portions of the funding come as tax credits, which can be used only after the production is complete, sometimes it takes upto even two years and Bridge Financing is needed meanwhile. Most of the Canadian banks have entertainment divisions within the bank and they all are very well versed with the legal processes & documentation etc required for co productions” Hans also asked the producers to be flexible, transparent and patient when dealing with the Canadian co pro funding saying”These guys give a good lot of money and so it takes some time for a production to get greenlit. One has to be flexible with the partners. Also make sure that one plan’s for at least CDN 100,000 as legal fees that would be incurred. You will be required to submit large boxes of papers and documents. Anything you do here has to be completely transparent”

“The Canadian system works very well but it is not the fastest in the world. It takes close to 1.5 years for projects to pass through” he added. Sharing some more insights from personal experience, Hans shared,”If you are getting into a co pro with a Canadian company in Montreal than by default you are giving the company all the rights for all French Speaking countries” Here’s a slide fromm Hans presentation. 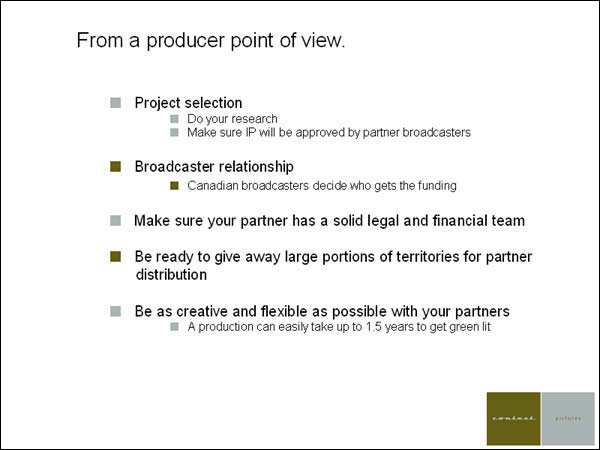 Canada has co pro agreements with over 53 countries and Hans shared with the audience the typical financial and production work split structure between Canada and an EU Co Pro country. 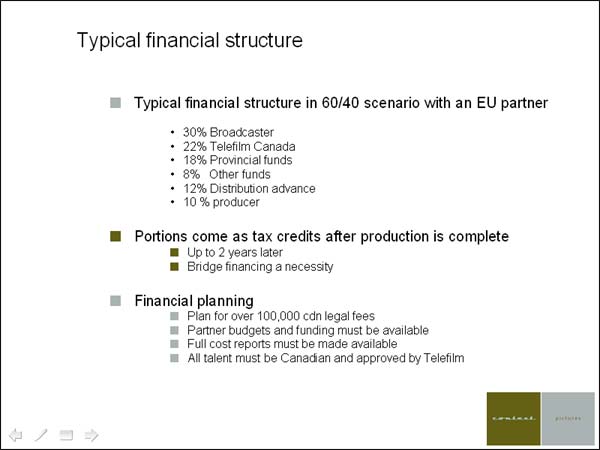 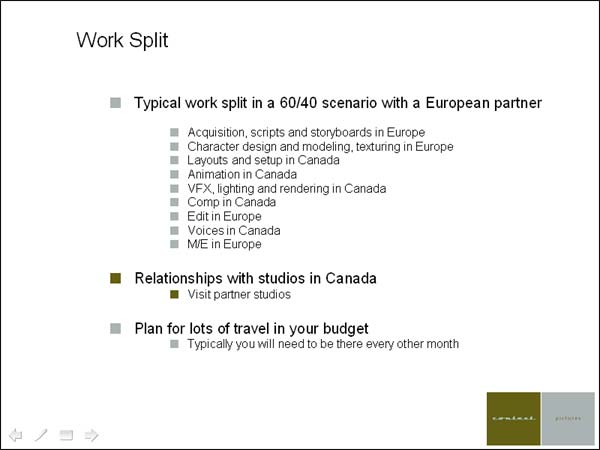 Joan Vogelesang talking at FRAMES 06 session on Co Production in Animation Taking guard next Toon Boom’s Joan Vogelesang listed a few dos that studios entering co production agreements ought to be involved in. “Have treaties in place to have content recognised as locally produced in both the partner countries. That will give you access to subsidies and markets within both of the partnering countries” she remarked. “Co productions are a great way of getting your foot in the door into otherwise in accessible markets. Canada has co production treaties with 53 other countries, it is so bad that the treaty with India hasn’t yet happpened. I hope this happens soon” she added. A few points made by Joan were… The benefits of each party in the co-production? -Access higher license fees in each territory and optimal placement as the content is considered â€?localâ€? – Access the talent and capability of Absolute Digital in the UK – Better creative diversity with both parties involved What are the disadvantages? -Communication and distance -Overhead costs in both locations -Complexity of aligning schedules Challenges -Have treaties in place to have content recognized as local -Challenge at the level of difference in styles -Combine mannerisms of the East with narrative structure of the West -Create a new look! -Quality, Quality, Quality! Following are a few of the slides that the Toon Boom CEO presented Talking about Canada’s rich legacy in animation which runs through many decades, Joan remarked,”NFBC (National film board of Canada) was a creative dream we developed. It is responsible for creating outstanding animators, animation and subsequently outstanding animation film and animation colleges like VFS and Sheridan. Any studios co producing with Canada also have the opportunity to involve in their projects wonderful talent from the best animation colleges in the world”

Toonz Animation India’s Hari Varma taking last strike in the session, explained the many benefits that accrued out of co productions which went beyond the financials into the creative realm.

Without revealing too many details Varma hinted at a major co production activity of Toonz Animation India along with an LA Based studio saying,” One of the major co production projects we are starting in May will involve a lot of our artists being flown to LA where they will be part of the creation process from pre to post” “That’s what one means by going up the value chain” added Hari. “Children are most universal consumers. You can generalize (to an extent) their psyche. Which is why when co producing, it is very apt to get into either pre school or tweens properties” pointed out Hari. Making a case for IP, Hari elaborated,”Long time returns are non existent in a service model. 400 to 600 people working in a studio is not the kind of wealth that is being sought. It is IP that helps build a library, which in turn translates into equity. An intelligent way of creating IP is through co productions where funding, risks, talent, technology and eventually profits are shared” Following are few points Hari made Create content for Pre-school and B4 Teens (Tween) market -Children from across the world have more or less the same sensibilities and aspirations/problems -They are yet to be moulded to their regional culture -Due to this, the content required is very large in this category and there is a huge market though fluctuating at times -The added benefit is of Merchandising possibilities Selecting a Partner A partner is expected to bring any one or more of the following to the table? -Methods to reduce the cost of a show -Broadening of the funding base -Financial incentives and tax breaks -Synergies in creative talent which helps the show to become better Further steps in Co-production Partnerships -Leverage co-production treaties to get production subsidies -Agree on who recoups first and how profits are shared -Take stock of Licensing arrangements and Distribution Rights -Negotiate creative control and division of labour -Commitment to the delivery dates in the desired style & quality Talking about going up the value chain, Hari even suggested briefly that Indian studios once involved in the higher part of the work could even outsource to Phillipines and China. Overseas marketing â€“ The Key Driver -Focus on international pre-sales; it helps gauge the demand for the property – Align with established and major studios in US and Europe – Advertise our expertise in technology aggresively – Build bridges with cheaper markets in China and cleverly leverage them A few of the slides presented by Hari Audience Q&As had questions like ‘Will the Indo – UK co production treaty which is on the anvil create competition or hindrance to Indo Canadian treaty? – Toon Boom’s Joan Vogelesang retorted, “I dont see it as competition at all, in fact that’s an additional opportunity” Speaking post session to Animation ‘xpress Hans Vander Sluys remarked,”India should fast track their co production treaty with Canada to further develop all their projects and work in Canada”

Session moderator Rajesh Turakhia added,”Case Studies like these highlight the positive results that Canada and associating co production countries have gained for their animation industry. This makes a strong case for for quickly conducting the co production treaties”

“If the government helps us, this industry can be parallel to the IT industry very quickly. We are independently already on that track” he concluded. One of the more cohesive sessions in Animation at Frames this year, the subject which was co production in animation, almost became a session on animation co production with Canada. The same however as a case study was useful to drive in the point that there was a lot real advantage to be gained from co productions beyond merely projecting percieved value. *With special thanks to Joan Vogelesang, Hari Varma and Hans Vander Sluys for sharing their presentations with Animation ‘xpress to facilitate the writing of this session article connect@animationxpress.com