Netflix has dropped the final trailer of its upcoming animated musical feature, Over the Moon. The trailer was released in celebration of the Autumn Moon Festival in China. Over the Moon voice actor Ken Jeong and regional cover artists YooA, Carmen Soliman and Priscilla Alcantara teased different installments on social media as the moon rose across their respective countries.

The new trailer gives a glimpse into the music of the film, and shows a colorful side of the movie, in contrast to the last trailer. The trailer introduces Fei Fei (Cathy Ang) who believes in the legend of the moon goddess whose stories she heard from her deceased mother, so much so that she builds a rocket to launch herself into space along with her bunny. When the rocket lands on the moon, what she sees is completely unexpected. The Moon Goddess (Phillipa Soo) moonlights as a pop star and announces that she will grant one wish to anyone who reunites her with her “one and only true love”.

The official synopsis says: Fueled with determination and a passion for science, a bright young girl Fei Fei (Cathy Ang) builds a rocket ship to the moon to prove the existence of a legendary Moon Goddess, Chang’e. There she ends up on an unexpected quest and discovers a whimsical land of fantastical creatures. 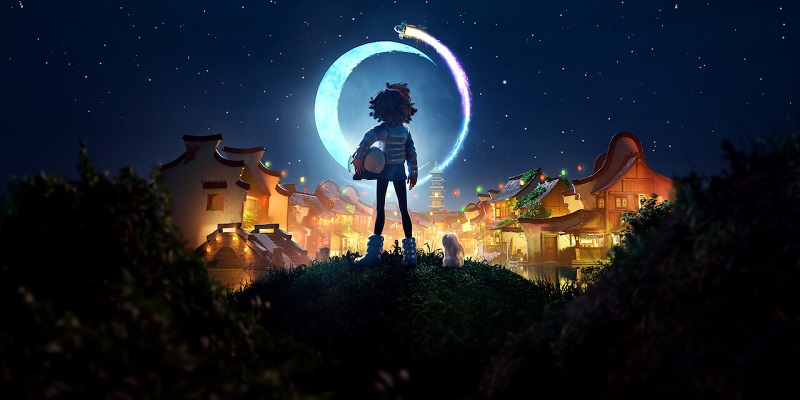 Over the Moon features the voices of Cathy Ang, Robert G. Chiu, Phillipa Soo, Ken Jeong, John Cho, Ruthie Ann Miles, Sandra Oh, Margaret Cho, Kimiko Glenn and Artt Butler. The musical score of the film is by Steven Price with original songs from Christopher Curtis, Marjorie Duffield and Helen Park.
The movie marks the theatrical debut of Disney animator Glen Keane (Dear Basketball), who is co-directing the film with John Kahrs (Paperman). It is written by Audrey Wells (The Hate U Give) and produced by Gennie Rim (Dear Basketball) and Peilin Chou (Abominable). It is in partnership between Netflix and Pearl Studios.

The film releases on Netflix on 23 October .