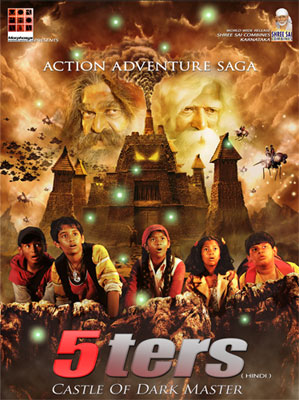 5sters is slated to be released in May all over India. The film is primarily made in Hindi and dubbed in Telugu, Tamil and Malayalam. Morphosys Information Pvt. Ltd. has funded the project and provided the infrastructure for the freelancer animators and artists to work on the film.

Talking to AnimationXpress.comVijayalakshmi NS, Associate Director/ Story writer/ Digital production head 5ters shares, “5ters amalgamates live action with 2D, 3D animation and visual effects seamlessly and provides the audience with an unparalleled experience in movie viewing. Fertile imagination, strong story line and a deep understanding of the psyche of the Indian kid has led to the development of the film 5ters”.

The duration of the film is about 120 minutes and it is releasing as 35mm Cinema Scope. The film is shot on Viper digital camera.

5ters is an expedition across the real and the imaginary world undertaken by five kids. The five children get lost in the forest while on a school trip and come across various thrilling adventures, the solving of which leads them onto a deep insight into their role and responsibility as the future of the world.

The artists who have worked on the Animation and VFX of this project consist of working professionals who used to work in big studios all over India and now are calling themselves ‘Thinking Hands‘. It‘s a core team of 20 artists providing specialized and personalized assistance for content creation, planning, managing the content, and ensuring the completion with quality and authenticity.

About the ‘Thinking Hands‘ Vijayalakshmi asserts, “We are a group formed out of passion for quality films. We have worked on many national and international projects as part of different companies. All the areas in 5sters from story, pre-production to live action, 2D and 3D animation, visual effects and compositing were handled solely by this team”.

“I want people in Animation and visual effects industry to watch it and believe that even a small team without any big backup can do such a huge task! Nobody believed we can pull this off and today I am proud to say that we have pulled it off! Thanks to our Producer who believed in our strength”, Vijayalakshmi concludes.

For more information on the specific team member visit 5ters.blogspot.com