Marvel’s What If…? will feature plenty of MCU cameos, the animated series’ head writer A.C. Bradley has lately revealed.

Marvel’s What If…? is a much awaited series bringing in the male and female superheroes of the Marvel Cinematic Universe (MCU) to tell alternate stories going with the title, featuring the heroes and villains they’ve played on the big screen.

Chris Hemsworth, Mark Ruffalo, Paul Rudd, Sebastian Stan, Jeremy Renner, Tom Hiddleston, the late Chadwick Boseman, and more will all reprise their characters from the universe and various parallel universe takes on Thor, Hulk, Ant-Man, Hawkeye, The Winter Soldier, Loki and Black Panther. Additionally, there will be quite a number of other cameos by actors and actresses from the MCU.

Bradley recently responded to a question on Twitter about the show’s cast hinting and somewhat confirming the development: 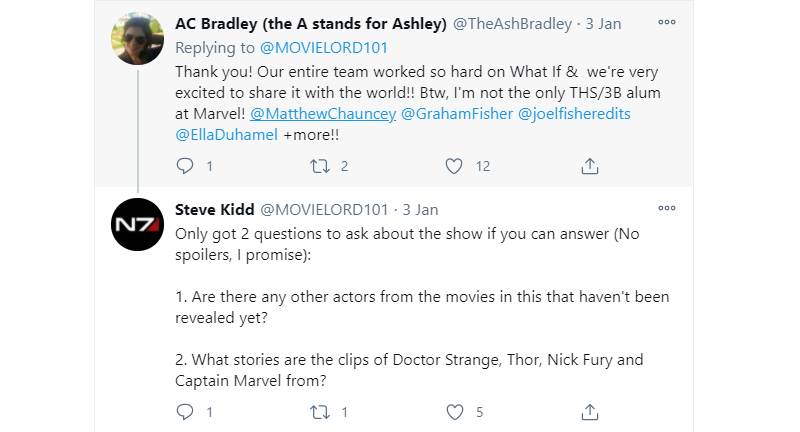 Having a lot of cameos in What If…? is no surprise as Bradley previously explained how the audience will witness so many MCU characters throughout these episodes, even if they aren’t explicitly focused on them. He said earlier, “Kevin [Feige] said that we will be exploring every movie in a new way, but not every episode is about one movie if that makes sense. On the reel, there is this image of a Star-Lord as T’Challa, because we wanted to see what would happen if the worlds of Black Panther and the Guardians of the Galaxy collided? That was taking two universes, two to three movies, kind of twisting them in new ways.”

Till date, all Marvel stars confirmed to appear in What If…? are:

Marvel’s What If…? still hasn’t received a release date yet, but it’s expected to drop sometime in mid-2021.