The highlight of the event was a dance performance by the Mighty Raju Mascot to the music of the film which left the audience asking for more. Guest of Honour, Kajol loves Mighty Raju as her children love him too and she thoroughly enjoyed herself. Kajol also received ‘The Mighty Mom’ award from the director of Mighty Raju- Rio calling, Rajiv Chilaka and Mighty Raju himself.

Speaking about the occasion Samir Jain, the producer of the film said, “It is an honour to have Kajol with us. We at Green Gold are absolutely convinced that Kajol is the perfect role model mother balancing profession with family so we decided to honour her with the Mighty Mom award.  It is a perfect timing as well, Mother’s day is just around the corner. Our content is for children and we want to reach out to discerning mothers so that they are aware of our offerings. 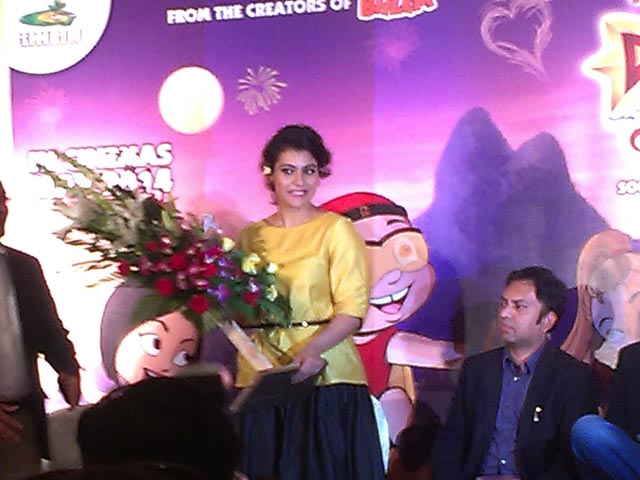 On receiving the Mighty Mom award, Kajol commented, “Well I don’t know if I’m a mighty mother or not but yes I have always maintained that my children are my foremost priority and responsibility. As for Green Gold, I would like to thank the team for naming me Mighty Mom. Mighty Raju and Chhota Bheem are a part of my living room, so I’m quite excited about this film. I know for a fact that these are great shows that are not just entertaining but have a sense of learning and value system attached. They get a peek into our culture, mythology and roots through an interesting narrative which I appreciate”. 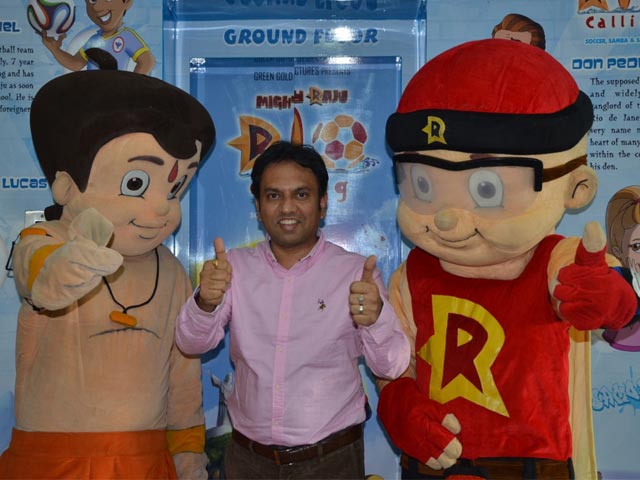 Talking about the film, Rajiv Chilaka added, “The FIFA world cup football is scheduled from June 2014 in Brazil and the entire world would be watching it. I wanted to make a football based film for children and hence decided that it is best to set the film in Rio, Brazil. A team of about 20 creative artists from Green Gold went to Rio De Janeiro and did the recce for the movie. It only made better business sense to carry forth one of our characters into the film instead of creating a fresh one. After a lot of brain storming we decided to take Mighty Raju to Rio. I’m extremely excited about the release of this film as it also marks an opening for our international endeavours”.

The film is all set to release during the school summer holidays on 16th May. The tagline of the film is ‘Soccer, Samba Samosas’ and the story is based in the beautiful city of Rio De Janeiro, Brazil taking Mighty Raju away from this home town of ‘Aryanagar’.

Mighty Raju today has become a much loved character for children on television. The show is aired on Pogo channel every weekend in a one hour format.  Mighty Raju, Rio Calling is the third film from Green Gold’s roster, the earlier two being Chhota Bheem & the Curse of Damyaan in 2012 and Chhota Bheem & the Throne of Bali in 2013.

With a fan following across the age groups of 4 – 10 years and the success of the earlier two releases, Green Gold Animation decided to release this film to entertain the kids on 16th May.

Moby (Raju’s Pet), Cheeky (Raju’s Robot), Julie, Swamy( Raju’s  Father), Sandhya (Raju’sMother),  Karati (Evil Scientist) who are the key characters of Mighty Raju Television show will feature alongside additional characters such as Daniel, Lucas, Maria and Don Pedro in the film. The music of the film was recorded in Brazil, Sunil Kaushik is the music director, Sunidhi Chauhan and Bali Brahambhatt are the lead singers in the film.