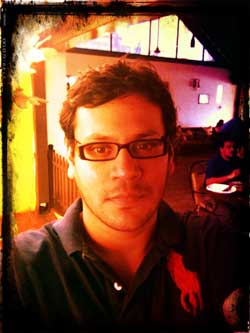 iRock is a design creative company and is creatively collaborating with ientertainment studio which has recently started the production on the stereoscopic 3D animated film Andaz Naya Naya which is based on the hit film of 90s Andaz Apna Apna. AnimationXpress.com‘s Chaitra Shetty spoke to Sidhartha M. Jain, Producer & CEO, iRock Media Pvt Ltd about the film.

The teaser poster of Andaz Naya Naya has come out recently? So what is the latest development with the film?

We started the pre production for the film last year, in terms of design, scripting. We have recently started the production of the film and it is happening at ientertainment studio (Mumbai) headed by Prasad Ajgoankar, who have earlier done the Warner Bros’ animation film ‘Bird Idol’ two years back.  The film is being made in stereoscopic 3D and we have released the teaser poster of the film.

iRock is a design creative company, we are prudent in terms of design aesthetics script humour and we are creatively collaborating with the studio.

So it’s a remake of the Andaz Apna Apna?
It’s not a remake. We are taking the story forward, it’s a new story. The dynamics remains the same between the characters, the girls want the boys, the boys want the girls, bad guys want the diamonds and the father doesn’t want the boys. We have used a mix of the old and new dialogues.

It’s like how in the Archies world, the dynamics are the same, and every story has a new plot with the same characters wanting or not wanting the same things. Like Mr.Lodge will never want Archie to marry Veronica.

So we have taken the same approach. We are calling it Andaz Naya Naya because it’s a new story and we have presented it in a new medium. Of course the animation world is new and has some new characters but we have tried to retain most of the older ones. Basically it’s going to be more fun. 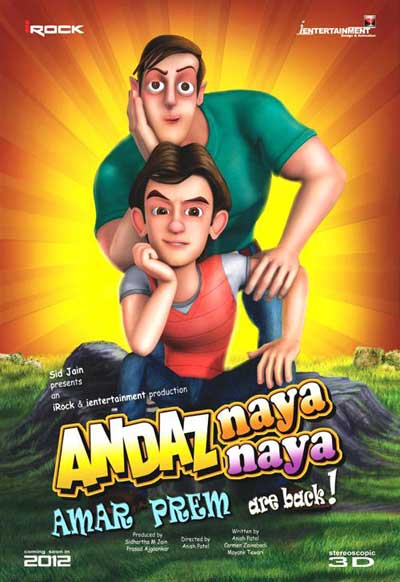 Who is directing the film?
We have got an in house director Anish Patel. So all the writing, directing and creative team is from iRock.

What kind of a look will the film have?
Since all the characters in this are human, the look is not very stylized as Simpsons. I would say somewhere between usual doodle style characters and Simpsons. We will not have an exaggerated type of look. Not something that will be strikingly different, but something familiar and comfortable.

We are not focusing on the visual style as much as we are on humour. Like in Simpsons after two minutes you stop noticing the characters and your focus is on humour, the humour dominates the visual style. On the other hand the Pixar films are distinctly a combination of both, because they have the monies, the resources and the manpower.

We have limited resources in that comparison, so we have tried not to put too much pressure on the team, and we have put the maximum burden on the characters and dialogues.

Why make it in stereoscopic 3D?
We have done some crazy things in the film in terms of action. It’s comedy-action film like a Jackie Chan film. So 3D is a great medium for it. I wanted to give the audience a reason to see the film in 3D and give them a unique experience, the experience of laughing and visually seeing something that you can’t enjoy at home or on a pirated DVD.

What is the budget of the film?
I can’t reveal it, but it’s like INR 10 Crore film broadly.

There have been talks that you are retaining the original voices of the film.
That’s not true. We have got the original characters and we are in talks with the same actors if they are willing to give their voices. We are currently doing the animation from scratch. The whole idea is to get the visual performances first, so to get the actors excited and then see if they want to give their voices. It would be great to have the original voices, but if we can‘t get them its cool.

Animation features have not been successful business propositions in India. How are you approaching it?
The reason that Indian animation films have not worked is because a) they have been made targeting kids b) they are not fun enough, they have not built the characters that you would want to go and see, so there is no reason for the parents to go with the kids.
There is a lot of mix and you are not sure for who the film has been made.

In this movie, there are many factors that are a part of our strategy. Our film is based on a cult comedy, everyone loves the characters and dialogues of Andaz Apna Apna. Fans of my films are already adult.  So for me getting the adults to watch the film is not a challenge, as the other animation films.

After the teaser poster release we got like 3 lakh Google searches on the film in 48 hours, the amount of hits is incredible. The fan following is so strong and the 3D stereo aspect of it will be compelling reason for people to watch the film.

I have been already flooded with people who want to know more about the film. The distributors are after me, wanting to know when we are releasing it and what are we pricing the rights at. I have got two TV Channel offers and Home Video. People are already excited about it.

Andaz Apna Apna as you say is a cult film. How have you made sure that you don’t disappoint the ardent fans?
The answer to that is that I myself am a fan of the film and I bought the right of the film 9 years ago and waited for 9 years to make it as I was not getting the right story. I have been careful about waiting for the right time and the right story, the right team.

What were the challenges in bringing this comedy to the animation medium?
The dilemma that we had was, should we make the characters animals or should we retain them as humans. That took a long time. First we thought monkeys would be fun and they were. We started designing the monkey characters and they were hilariously funny. But when I did a survey with the fans, they wanted to see them as humans as they saw them in the film. For 3-4 years I was stuck in the zone monkeys- animals- humans.

Third was the look of the characters, I didn’t want them to be exactly as the actors who played them, just to have a glimpse of them but not resemble them entirely. We made them more like Amar Prem.

When is the first trailer coming out?
The first teaser would be launched theatrically in 3D stereo in the month of December.

And finally what can the fans of Andaz Apna Apna expect from Andaz Naya Naya?
What they can expect is the same kind of humour and fun in a new presentation. 3D stereo is going to be the USP of the film. Heavier dose of action, shorter film of 90 minutes with 2 songs at least. Basically a mad crazy roller coaster ride.