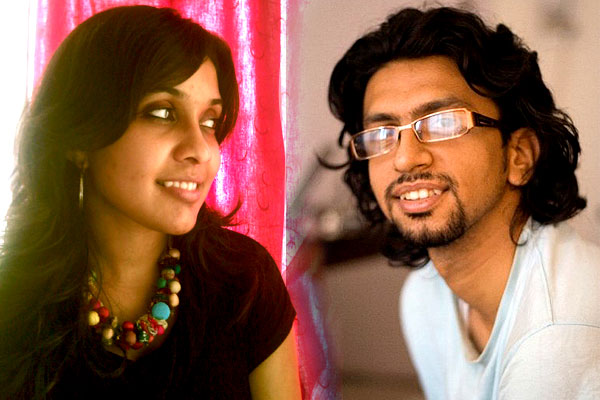 The recently released ‘Luv ka The End‘ by Y Films has an exciting and eye grabbing title song, the animation for which was completely done by Invisible Rabbit, Mumbai. The brains behind the Freak Out execution of the song were Nupur Bhargava and Hitesh Kewalya. AnimationXpress.com‘s Farhatnaz Ansari spoke to Nupur and Hitesh to know more.

How was Invisible Rabbit approached for this project?
Nupur: We were first approached by Y films to do their Logo animation. They were familiar with our work and after we pitched a couple of ideas they finalized on one of the ideas and we started our association with Y films.

Hitesh: Y films logo animation was well received and really worked for the studio. We were then asked to design and direct the Freak out Title song for their first film LUV KA THE END which released in May.

How many artists worked on this project?
Hitesh: Animation projects with a scale like this happened due to some really good team effort. From actors to four dress men at the shoot, each one was an integral part of these projects.

Nupur: 3 core people team consisting of me, Rajiv Eipe and Hitesh Kewalya for Invisible Rabbit executed the Y Films logo animation. We had a crew of about 30-40 for the shoot.

2 core people team consisting of Hitesh Kewalya and me at Invisible Rabbit Designed and Directed the Freak out song. We had One Design assistant Abhilasha Roy and a crew of about 60 people for the shoot which included 10 actors, DOP, art director, stylist, makeup artist etc.

What look and feel have you tried to give to the animation?
Nupur: Y films logo- The starting point for the Y films animation was the logo the studio had already created. We brainstormed a couple of directions which seamlessly blend with brand and its logo.

The studio is young, dynamic and funky. Our treatment and story was an extension of that. The exuberance of red against grey shades looks dynamic and clearly highlights it. The sketch style was kept to enhance the edginess and youthfulness of the artwork. Since this would be playing in the theatre we wanted it to have a lot of detail and scale. We took inspirations from the architecture in Mumbai for the detailed background. We wanted it to have enough depth that its fun to watch, even repeatedly.

We wanted to blend the paper folding and use the flip book technique for animation. This technique is an illusion of animation rather than actual animation and the art of paper folding for each aspect of story was unique as it aided in the visual flow. We hand painted and hand drew each frame to keep the organic feel of the story.

Hitesh: LKTE- Freak Out is the title song of the film and it would be the first time the Films characters will be revealed to the audience the video needed to be as cool and fun as the film. It had to introduce each character with their mannerisms without giving too much away from the film. We choose to keep a muted background so that the concentration could be on the t-shirts and the actors.

Nupur: Two different animations happen in this video. One that is printed on the T-Shirts and the other is when we shoot the actors in pixellation. The design was kept funky, bold and colourful. Animation was kept graphical with strong content.

What is the format and duration of both of this animation clips?
Nupur: Y films logo- The duration of the video is 30 Sec and it was shot using Red camera with 4k resolution. It was then printed on film.

LKTE- The song is 2mins 30sec and it was shot using Cannon 5D. It was edited digitally in 4k and then printed on film. Both projects took about 2.5 -3 months to compete each project from pitching, concept, design to final DI.

Were there any challenges?
Hitesh: Both these projects are completely different from each other except one thing, they both use techniques we have never seen or done in India. We needed to do a lot of research, test shoots and explorations that led us to execute them successfully.

Hitesh: The best way to deal with challenges is by doing lots of explorations, tests so that we can pre-empt technical constrains and work around it. We spent a lot of time in planning the creative aspect as well as the logistic part of the animations. Making a schedule and sticking to it also helps.

How was it working with YRF?
Hitesh: YRF is undisputedly the biggest name in the film Industry in India. Y Films is a part of the YRF which is dedicated to make films for the youth by the youth.

Nupur: Y Films is spearheaded by the visionary Ashish Patil. It‘s always a pleasure to work for Y films as they are very passionate and are open to sometimes even our bizarre ideas as long as it works for their films.

What next in Invisible Rabbit?
Nupur: Our studio is always keen to work on exciting projects be it commercials, broadcast design, music videos, title sequences or an animation series. We easily move from 3D to 2D to Stop-motion projects as long as we can create something that breaks the clutter and makes our client happy.

We have just finished two animated commercials for Metlife Insurance, starring the iconic peanut characters Charlie Brown and Snoopy. We are the first Studio in India to animate Charlie and snoopy.

Hitesh: We are currently working on a new exciting music video, details of which we will be sharing soon.