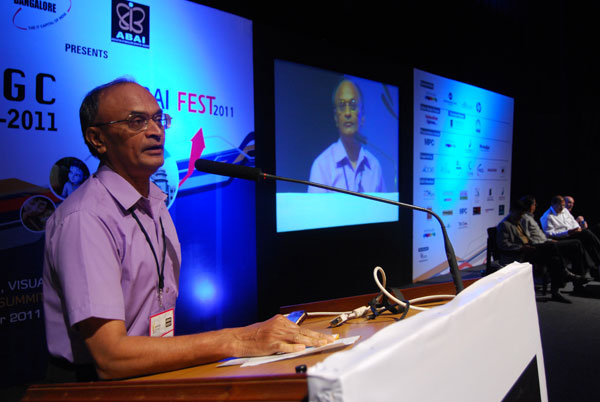 Karnataka Government would be the first in the country to announce an exclusive AVGC Policy.

Yes. Hopefully we would be announcing it on the day the Bangalore IT.biz kicks off that is 18th Oct 2011. In fact animation is now a part of Bangalore IT.biz and there is a half day session on it, wherein the full content is being managed by ABAI. Bangalore IT.biz will have participation of 2000-2500 students from all over India.

Why a separate policy for Animation?
A separate policy for Animation is needed because what is good for IT is not necessarily good for animation. Because IT here is only one of the tools and there is a lot of interactive creative content being created and compared to IT we have a much younger population active. If you look outside you hardly see a man or woman more than 25, which is a good thing. So the policy also should be such that it takes the requirements of the young minds into account.

Will there be support from government side to help local companies go to international markets?
There will be support. The support need not necessarily be financial but there will be support. Creation of ecosystem is what the industry is looking forward to and we will make sure it happens. There are many developments on the education front as well.

When it comes to the implementation of the policy is the government looking at establishing a specialized body for the same?
We recently announced the Software Policy V2.0 and the Hardware Policy, immediately after the announcement the important thing that came up was the creation of a working group to implement that policy.  Otherwise it just becomes a paper policy.

So as soon as the AVGC Policy is announced on 18th Oct, there will be a working group formed with representation from the Government, Industry and the Academia, who will look at the implementation of the policy, the timelines and so on.

As we are an IT Hub, BT Hub, Nano Hub in India, we wish to become the Animation Hub in India.