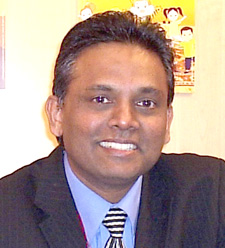 Please tell us about AniSolutions‘ and its business model?
AniSolutions was started by me In 2005 and some directors in the United Kingdom. Our aim is to provide consultancy to animation studios for startups, co production deals, concept development and representation for service work.

The whole idea is to provide the solutions in which I have an expertise and having worked in the animation industry for 27 years, mainly in Asia and now in Europe, I realised that my knowledge and experience would be beneficial to studios in Asia and Europe.

I remembered when I started my own studio; I had lots of questions and needed guidance. But at the time, there was none available.

What are some of the projects that your company has been involved with?
Currently, we are working on a script for an animated feature. It is a crime story in the style of the Japanese “manga” movies.

We are also working on two pre-school concepts with A Go Go Productions in Hong Kong. One project is in CGI and currently in development.

We are also in discussion with a creator of popular comic hero in the UK for a possible TV series or feature project.

We also get lots of enquiries from studios in India, Singapore, China and UK, to work on various projects. We are working towards getting these projects realised.

You have been involved with Animation in Asia as well as in Europe. Your comments on how these regions differ in their approach to the creative as well as commercial aspect of Animation?
I feel that the West has had a head start as creators of TV content for many years. Asian studios have always been seen as cheap service providers. All creative work was done in the US or in Europe like scriptwriting, voice talents, art direction and music. This domination of the West has created a formula for all TV productions, which thus far, has proved successful. There is a certain way the scripts are written, the humour, the talents, the art direction, etc.

However the Japanese animated series have created a major impact in the West. Suddenly, Asian studios in Taiwan and Korea realised that “Content is King” and started creating their own content. Studios in India are quick to realise this too and are now making a bold attempt at producing their own TV series. I congratulate them for this attempt. Most of these productions are aimed for the domestic market but they are also hoping to make it internationally.

It‘s a great path to traverse though. The challenge though is in finding the right “formula” to make it internationally.

Your Perspectives on Indian Animation
I have worked with many Asian studios and the Indian studios have always amazed me. They are willing to cooperate and share ideas with each other even though they are competitors. Whenever I meet Indian studio executives in overseas conventions, they are always working as a team, having dinners together and exchanging ideas.

The various competitions, conferences and workshops organised all over India bring talents together and offers new hope for the industry.

India has already started producing TV and feature contents in the last ten years. A bold move which took Taiwan and Korea 30 years to make.

I only hope that the government realises the potential Indian studios have and provide the support similar to that of Korea and Singapore.

Any India plans in the near future?
I see huge potential in India. We hope to organise a conference this year. I am also hopeful that we will be collaborating with some studios this year.

What new trends do you see emerging in animation globally and where do you think is the big opportunity in the animation business?
In the TV market, I still believe animation will play a major part for children‘s entertainment. I see more serials in CGI due to video games and animated features. But just like stop-motion, 2-D animation will still have an audience for all age‘s viewers.

For the features, although it has been of CGI dominated recently, I feel 2-D features will still be there. But they need to be more sophisticated like the manga “Ghost in the Shell” and like Miyasake‘s “Spirited Away”, with strong storylines and art-direction.

Additional comments
I would like to see Indian animation making the same leap as the Japanese have done in the international market.