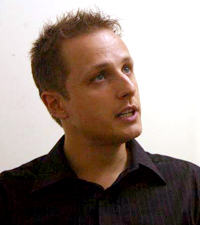 “One thing I really like about Indian animators is that they are very determined & have very strong work ethics.”

“I suppose I do base a lot of my ideas on experiences and people I have met. Itâ€?s what I prefer to do, if I am given a choice. I like to keep things close to reality.”

What according to you is the importance of storyboarding in stop motion and clay animation? I think storyboarding is really important for any kind of animation. A storyboard is a key feature in the pre production phase of the movie. They help the director to visualize how the film should appear in the frame and at what pace and movement. I donâ€?t think that good storyboards require good drawings. You should look at Martin Scorsesâ€? drawings, or Hitchcockâ€?s original drawings. As someone put it, the storyboard is the film on paper. From the global point of view, do you think that the animation communityâ€?s focus is more on the execution techniques rather than coming up with new story telling styles? Not sure on that one. I assume that there is room and even demand for both. But I reckon with time it will become harder to blow the peopleâ€?s minds with fancy CG effects. The evolution may be in that these effects will become easier, faster to achieve. What next after â€?Horn Ok Pleaseâ€?? Well these days I am working on a character called â€?Minkyâ€?. Itâ€?s about a cheeky monkey learning to deal with lifeâ€?s essentials, under the patronage of two kids. It is a pilot project and if we get the green signal weâ€?ll make a full animation series. We are waiting to hear about a second series for ON THE AIR, our first animation series for the BBC, went down really well. Our best work yet. And I am developing yet another childrenâ€?s animation character BABY BEE. How can short film makers make money out of their short films? In India itâ€?s very hard to find budget for films as the producers/directors have to keep chasing for funds. In some European countries you can just about survive by making shorts all your life, if you are a big name, some governments will support you. But most of us go commercial either with series work (which is my favorite) or TV ads. How long are you in India and are you open to conduct more workshops with studios/ institutes/ organizations while here and in future? Actually, this time it won’t be possible for me to conduct more workshops in India as I am about to leave but yes, in future I will definitely come back for a fifth time and do workshops. We need better stop motion animators from here!! connect@animationxpress.com