Indian animation is thriving with myriad projects, diverse content aided with perfect treatment and execution. Released on Amazon Prime Video (APV) a few days ago, animated feature Dhira is an addition to that list.

Based on the life of Indian poet, scholar, and advisor in the court of Sri Krishnadevaraya, Tenali Rama, Dhira is the biggest pan India Motion Capture (MoCap) film directed by A-Theorem Studios founder Arun Kumar Rapolu.

Speaking about the inspiration for Dhira, Rapolu told Animation Xpress, “My entire career is based on inspiration. Coming from a middle-class family, movies were a great source of inspiration. S.S. Rajamouli and superstar Rajinikanth have inspired me the most. Since last decade, I have been chasing my dream of making something larger than life through movies, and finally, when I got an opportunity, I was sure that whatever I make will not be just for fun. Even kids need inspiring elements along with fun. So, I wanted to choose a popular character but not from Ramayana or Mahabharata. Finally, after much brainstorming, I landed on Tenali Rama Krishna – a perfect blend of brilliance and humour. Through Dhira, I wanted to convey the message: ‘BUDDHISHALI is more powerful than BALASHALI’.”

Dhira took more than three years to complete by a team of 75 people using mostly Blender. The 3D animated feature is completely produced by Rapolu’s A Theorem Studios, funded by his family and friends. He had set up two teams; one was to only generate money through outsourced projects and that money was invested in Dhira.

Commenting on the process of ideation to execution, Rapolu noted, “Having identified the concept, the big challenge for the team was to execute it in a new fangled way, as there’s already a lot of TV series and cartoons on Tenali Rama, yet keeping the authenticity alive. Gradually I figured the story, characters, characterisation, sets, dialogues, premises were developed for different scenes, situational/montage songs and then it slowly got expanded into 12 languages. We did in-depth research and visited places including Hampi, read novels, saw old movies on the subject.” 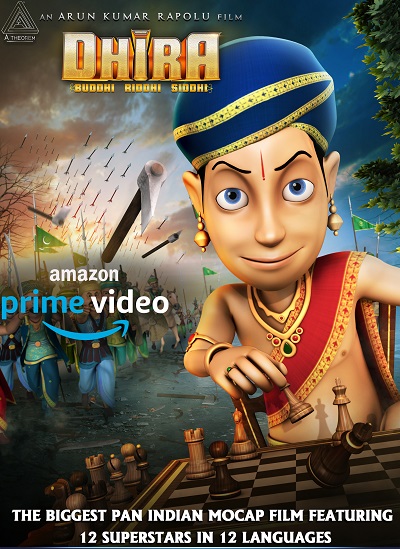 The story of Dhira follows historic events like Vijayanagara formation, Bahmanis intentions to capture Vijayanagara and their entire story revolves around these events. Although the characters are majorly derived from real life, fiction was added to the subject as Rapolu wanted to deliver something which is Historical Fiction. “By the time of lockdown, we were in the post-production phase and we could process remotely. The challenge was to assemble everything together, more than anything it needed a lot of patience and with a shifted infrastructure it was difficult,” Rapolu added.

Rapolu started his career with Color chips Training Institute and worked in MediaMandi International as Motion Capture lead for half a decade. He did outsourcing work for companies like Movement Code Studios, House of Movies (HOM), Electronic Arts (E.A) and more. Being passionate towards film direction and CG skills, he did D.F Tech in Direction Department from MFTI and  Screenwriting course from Annapurna Institute of Filmmaking.

Further stating on releasing Dhira in 12 regional languages, he said, “Indian market is a big market with one-seventh of the world’s population, plus I strongly believe animation isn’t just for kids. Although the reach is low for animation movies in India, I still decided to go pan India with different superstars featuring in each language. Somewhere I knew that die-hard fans would always be crazy about film stars/heroes. In fact, I have designed the Tenali Rama character in the film just like the respective hero portraying the role. I wanted to give the Indian audience what they wanted but in my own animation style.”

Rapolu shared that the response to date for Dhira has been outstanding. “It is good to have such a vast platform like APV to publish our content even in the pandemic. Yes, it was meant for theatrical release where the audience can feel the real output of what I planned to deliver – an amazing audio and visual experience. I wish we will soon release Dhira again in theatres when things are normal. Additionally, my team and myself are excited about our upcoming venture. We are looking for the investors presently and all I can promise is something very big, again!” he concluded.