Who doesn’t love the utterly butterly delicious Amul Girl? For decades now, she has been reigning the advertising world like no other, and has evolved to be a brand in itself. Post the session at Animation Masters Summit (AMS) 2021 with  Toonz Media Group former chief creative officer Hari Varma, eminent advertising personality Rahul DaCunha chatted with Animation Xpress on the legacy of the very successful Amul topical ads featuring the extremely popular and admiring Amul girl.

He said, “For us, it was important that we aren’t malicious. So when you have an animated blue-haired character – a small girl with a polka-dotted dress, people don’t usually take offence. When my father [Sylvester DaCunha] created the character, it was created as a marketing campaign – a cartoon character who’d attract kids to the brand [Amul]. But over the years, we realised that she can be a commentator, an observer, even a critic and much more. She’s a chameleon who can be anyone and anything. That was the sheer brilliance of my father and other creators; as well as the beauty of animated characters, for we can mould them any way we like, something that live-action is incapable of doing. There can be wonderful stories in live-action but animation moves you deeply. My job with this longest running ad campaign now, is to navigate and nurture the legacy that was built by my predecessors in the company.” 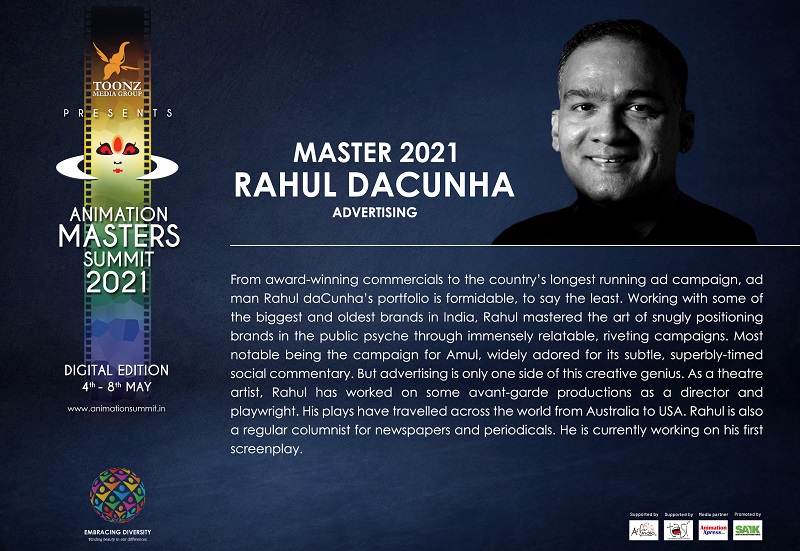 DaCunha shared that the journey has been a roller coaster ride with the Amul girl, who’s named Diya, throughout but they have consistently sustained due to the belief that the brand has put in them. “The character is loved because there’s a certain reverence with people and the message we’re putting out is the most important thing – be it any political, social commentary or on any issue. The Amul girl is mostly the observer and sometimes not even present in the ad, as people know that it’s her. She’s omnipresent. The message also depends on the situation and timing of the topical ad. For instance with the election campaign, Mamata Didi is Mamata Didi, you can’t change her, but the Amul girl is present there too as the representative or the voice of the brand as well as the people,” he shared.

DaCunha also mentioned that social media has been a game-changer and today’s audience needs more engagement and holding onto their attention span, unlike earlier generations. Earlier they could do a topical campaign once in 10 days, and now, it’s one and half days. “There’s a huge possibility as well as shortcomings on social media. For instance, K-Pop now is a phenomenon and there’s a song called Butter by the BTS which I hadn’t heard about [even the band] and the BTS fans or the BTS Army as they call themselves, wanted a collaboration between BTS and the Amul Girl as a topical ad. But there’s a chance of getting trolled or facing a backlash, hence I don’t pay much heed to them as the space is extremely fickle. You can’t sell a product [butter] and do social service at the same time – all the time. Having said that, I hope that the print and outdoor advertising mediums never go out of trend, because the older audience still holds onto newspapers as they’re not so comfortable with social media. There’s also a sense of nostalgia attached to it and the magnificence that an outdoor hoarding gives, can never be experienced on smaller screens. However, it’s true that print has a limited shelf life and some newspapers may not stand the test of time,” DaCunha added.

The Amul girl is by far the most loved and admired characters in the advertising space, so much so that HarperCollins has published three books on her. She can indeed at times be the mouthpiece for the common people and literally be the kid who asked the king, “Where are your clothes?”