Walt Disney India has three aces up its sleeves. The company has launched the latest season of Power Rangers — Power Rangers SPD (Space Petrol Delta) coupled with an extensive range of merchandising for the franchise and a contest weaved around the show.

The merchandising around Power Rangers includes toys, books, apparel, bed linen, stationary and mobile games. The price of the products will be in the range of Rs 50 – Rs 899. 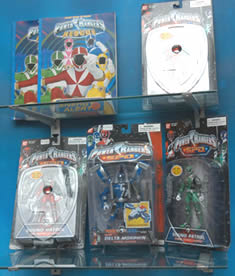 Disney will go all out to promote the new multi-product merchandise launch of the Power Rangers franchise with an integrated online, on-ground and on-air campaign.

Disney’s different businesses namely Disney Consumer Products (DCP), Disney Worldwide Publishing (DWP) and the Walt Disney Internet Group (WDIG) have tied up with various merchandisers across India for the products. DCP has partnered with New Boy, Weekender, Funskool, Milton, Frank Educational Aids and Art for All to retail the products. DWP has tied up with Sterling Publishing to launch a wide range of comics, story books, colouring and activity books, whereas the WDIG will soon be launching a new Power Rangers game on the mobile.

Additionally, the company will also make available the merchandising in Lifestyle, Shoppers’ Stop, Archies, Pantaloon and Funskool outlets across the country.

The Walt Disney Company India managing director Rajat Jain said, “Product innovation drives Disney. Our teams, in every corner of the world have a shared passion to design and develop world class products that bring stories alive. In recent years, Disney has transformed from passive to active licensing. From a deal-making focus where relationships were singularly with the licensee without much value add from Disney beyond great brands we create; the focus has shifted to consumers, retailers and product. Now, we work with licensees and retailers as partners.” 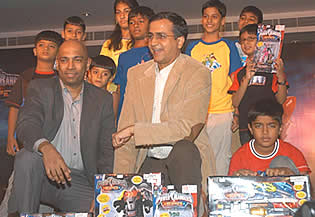 What’s more, the channel is also planning to weave a contest around this property called the SPD contest that will aim to find the biggest Power Rangers fan in India. GlaxoSmithKline’s brand Boost ChocoBlast will be the main sponsor of the contest and will give away four special Power Rangers special edition badges with every purchase of Boost ChocoBlast. Kids will have to collect seven unique badges in order to become the biggest fan. Brands like Peppy, Maggi and New Boy have been roped in as associate sponsors for the contest. The grand prize of the contest will be a trip to the NASA museum in the US.

“With the Power Rangers show, which enjoys the highest GRPs across all kid shows in India in the 4 – 14 age group, we are confident that this contest will be immensely popular and will break all records,” said Walt Disney Television International India director programming Nachiket Pantvaidya.

In March – April this year, Toon Disney had rolled out the Power Your Rangers contest and had partnered Reliance and Britannia for the same. The contest received 523,000 entries, the highest number of mobile downloads on Reliance and also stepped up Britannia Treat’s sales by 40 per cent. Disney had branded 10 million Britannia Treat packs, which alone amounted to a display value of Rs 71 million.

“The response we got for the Power Your Rangers contest was huge and we are sure that this one surpass all expectations,” Pantvaidya added.