The Cell has been involved with some cell animation these days!

The in house promos and creatives division of CNBC TV 18, The Cell‘s Delhi team has recently created a series of promos for CNBC‘s ‘Storyboard‘ a show which explores and analyzes what makes and breaks brands. Storyboard is extremely popular amongst the advertising, marketing and media fraternity.

Putting into practice the classical technique of cell animation, ‘The Cell‘ has used a combination of ink and charcoal on paper for the Storyboard promos which have been composited digitally. 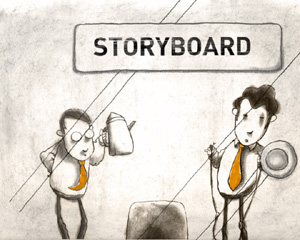 The artist duo of Gauri Bajaj and Kunal Kundu from ‘The Cell – Delhi‘ collaborated to create the films. Speaking to Animationxpress.com on the rationale behind using animation for promos of a show like ‘Storyboard‘, Kunal Kundu shared, “Animation as a medium in today‘s age is not just cartoon films; it is increasingly being used to convey a lot of other serious issues as well. The inherent lighter side of the medium in fact helps to drive home the point much more effectively!”

About why Cell Animation, Gauri Bajaj shared, “We chose to do cell animation so that the promos stand out from the visual clutter on television. Most promos are done digitally overall which somehow lose out on the charm and novelty that traditional hand-drawn animation can provide.”

“These films feature three characters which were developed as the three marketing men, who illustrate common marketing and advertising terms such as ‘Brainstorming‘, ‘Dummy‘ and ‘Share of Mind‘ very literally in the films. Towards the end of each film, one gets to see the aftermath of their doings. The promos do not directly sell the show, and are targeted at a niche audience the show attracts” shared Kunal.
Concept to final execution for the films was approximately two and a half months. 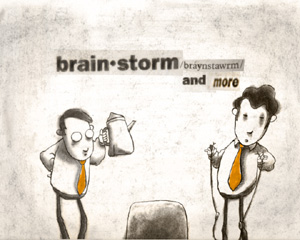 The promos will be on air in mid- February to relaunch the show. Gauri shared, “The deadpan characters, charcoal treatment and the animation for ‘Storyboard‘ promos was done in a way to highlight the everyday drudgery of an office routine. This works well in contrast to the exciting world of advertising and marketing, and in promoting the show by creating intrigue and interest in the minds of the audience.”

Conceptualisation and treatment were done by Gauri whereas Kunal looked after the animation. Characters and storyboards are a collective effort of both the artists.

About the challenges that the project offered, Kunal commented, “The most difficult thing while doing these promos was managing time in a news channel environment, as cell animation is tedious, involving a number of stages of execution such as key framing, inbetweening, clean-ups, final treatment, scanning and compositing. We were lucky to be supported through our endeavour.

“On a concluding note, Gauri said, “Animation has come out of its latency, especially in Indian television and has become widely accepted as the preferred medium to evoke audience response.”