Inching in slowly, the forces of Mickey Mouse, Power Puff Girls, SpongeBob, Barbie and many others have come together to invade the lives of every Indian kid! They are everywhere, on their toys, stationary, clothes, bed sheets and even underwear… this mighty world of characters is tracking these kidlings down, longing to be a part of the air they breathe. In the same way, kids are wholeheartedly welcoming their favourite television characters to have a frolicking time – a phenomena I would like to call “Charact‘o‘mania.”

The children‘s entertainment market is fast gaining pace in India, and apart from television and cinema, kid‘s centric broadcasters are channeling their energy towards building a strong foothold in the licensing and merchandising space. The emergence of organized retail in India has set this process in motion and is laying the foundation of a new era for kid‘s entertainers! 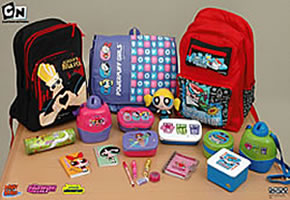 There are really no boundaries to the scope for merchandising activities which can extend far beyond the clich?© toys and board games to apparel, accessories, publishing, stationery, home d?©cor and home videos. Kid‘s entertainment permeates into every aspect of a child‘s existence and capitalizing on this trend are kid‘s broadcasters that look to take their brand and characters into the daily lives of children.

Although it is difficult to ascertain the size of this vast merchandise market in India, Cartoon Network Enterprises India and South Asia licensing director Jiggy George estimates that the size for both character and non character licensed products at organized retail would be in the region of Rs 3.5 billion.

Unfortunately, a large section of this market is swamped by several small unorganized players that rule the roost. Mattel Toys India head marketing Rahul Bhomik says that the market for licensed kids entertainment properties is still not yet fully recognized in India. Besides, the organized retail sector only comprises a mere 4-5 per cent. Hence it is difficult to arrive at an accurate figure of the size of the entire merchandise market. However, the size of the organized toy market alone is in the worth between Rs 250 -300 million.

Beyblades took the Indian toy market by storm in 2005

With two years experience in the Indian market, Walt Disney Company (India) Pvt Ltd director consumer products Roshini Bakshi applies a different approach to understanding the undersized organized sector. She says, “The market in India for character and non character based merchandise is not as large as Japan and the US, the reason for this is that generations of kids in India have not grown up with most of these characters and therefore a strong affinity and emotional connect has not yet been established.”

But just as every cloud has a silver lining, there emerges a consensus among experts to the fact that this industry is likely to see 15-20 per cent growth year-on-year.

“Although organized retail is still in its embryonic stage, we are beginning to see growth in this sector. Besides, organized retail will help to insure that intellectual property is respected,” adds George.

In the last two years kids channels have flooded the market with a host of products in various categories. In 2005, Cartoon Network Enterprises (CNE) partnered with Funskool India to unleash a craze that swept across the toy market with Beyblade. The merchandising arm of Cartoon Network CNE, boasts of having sold over 100,000 units across the country within a month of launch in August.

In the boys segment, Disney followed with the launch of Power Rangers in 2006 across toys, apparel, back to school products, home products like linen and footware, for which it partnered with a Dubai based firm New Boy. According to Bakshi, the strong action and play factor helped the product to fare well in the market. The year before that Disney tied up with Funskool for a range of girls toys around the Disney Princess theme, which has now been taken across categories to include accessories and make-up kits. 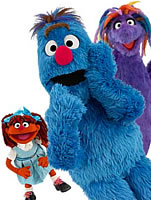 However, not all properties can be used across product categories. George highlights the fact that Beyblade as apparel may not garner the same response it did with toys, primarily because the main protagonist is the toy itself. While properties like Power Puff Girls would work well on apparel and Dexter on knowledge based products. 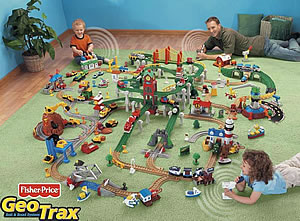 It might be true that kids crave for a touch and feel experience of their stars, however this may come at a heavy cost, drilling holes in their parents wallets. Bhomik admits that a premium will be charged for licensed products, however the price largely depends on the property. For instance, a movie property will have a short shelf life (4-5 months) and therefore will require a bigger bang. Similarly the price points will also be higher.

Mattel‘s Fisher Price caters to the pre-school segment with an array of interactive toys
“Prices will be higher than non licensed products but at the same time kids are willing to pay to own their favourite character,” says Funskool India marketing head David Selavaraj.

In their attempts to expand their categories and products Bakshi asserts, “We continue to push our partners to reduce costs because that is where the market lies. Although some licensed products are expensive, our objective is to grow because we want to be a mass brand available to the middle class Indian. Infact, this is how we have expanded globally.” 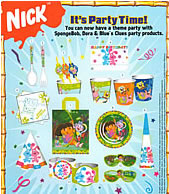 What‘s interesting is that broadcasters are also engaging in channel branding through multiple categories of products. Both Pogo and Disney launched branded apparel and accessories last year. Prior to that, Pogo also launched a boy centric toy range Pogo Wheels and is targeting to expand its footprint in other categories in the summer months of 2007.

But for this little world of fun and play to come alive, toy manufactures must feed on kids broadcasters and vice versa, both working in tandem. Bhomik says it‘s important for the channel to build a big property, while the manufacturer helps to make that world of fantasy and role play come alive. This in turn helps the channel to strengthen the bond of their brand and characters with children. In some cases when manufactures have their own flagship properties like Mattel‘s Barbie and Hot Wheels, channels are also roped in to air movies created by the company. Barbie has a series of nine movies and Hot Wheels has four.

But is this phenomena only metro specific or is this ‘make believe universe‘ making inroads into smaller Indian towns? George says that the Turner pair does have a mass strategy in place and is looking to build up its distribution in the Southern states during the course of this year, “We do not want to be elitist in pricing and distribution.”

However, the biggest limitation that marketers and distributors face in smaller towns is the lack of a spacious outlet. Mattel also follows a mass distribution path including traditional ‘mom and pop‘ stores and food and grocery outlets in smaller towns, however Bhomik explains that the major constraint is the lack of space for display the products, a key marketing strategy to allow the brand to come alive. This is the one benefit that mutli-brand outlets provide.

“In the smaller retail outlets we have to rely on the salesmanship of the guy at the counter rather than allow the consumer to experience a large visual display of the product,” adds Selvaraj.

For Cartoon Network Enterprises, which set up shop in India in 2001, merchandising initiatives currently contribute to 10 – 12 per cent revenues of its overall business. Having been around the longest in the market, George says, “For merchandising to work, you have to have a good property. It would depend on three key factors: A function of the equity of the characters, which has to be built over time by the network, the partnership deals for distribution and marketing and of course retail.”

Eyeing the advantage that kids channels are leveraging in this sector, even SET India‘s youth lifestyle channel Animax, which has been quite silent over the past few months, is planning to enter the merchandising arena with globally relevant characters and icons in the second half of 2007. Speaking of their plans Animax manager marketing Supriya Bambawale says, “These will not be based on a given anime property but instead would be created by the channel and will lend itself to music, gaming, fashion and lifestyle.”

While on one hand some kids channels may be apprehensive to foray into the licensing and merchandising sector, given its unreliable nature. Others may just be waiting to strengthen their properties in India before making this move. Although Viacom‘s Nick has a strong merchandise presence globally and has an International partnership with Mattel for a whole range of products, the channel has only recently started showing some activity in this category. Last year, the channel signed up with Bombay Dyeing for bed linen and this year the network is planning to beef up it‘s offerings with a SpongeBob PC game available at Planet M, Nick Jr‘s Dora the Explora apparel range and a whole collection of party accessories.

From the way the India story is unfolding – the higher disposable incomes among the growing middle class in India and the increasing influence of kid‘s ‘pester power‘, it seems like the kid‘s mechandising industry via the organised retail route is poised to see an exponential growth. For those players that have only recently realised the mammoth opportunity and revenue stream that this business provides, along with other seasoned players, the whole industry is bound to explode. So brace yourself for a mass attack!