The Coronavirus outbreak has changed the way we perceive ‘normal’ and things. Mumbai – the City of Dreams that is told to always be on the move, too has experienced an eerie silence and unusual images during lockdown. With the highest number of cases in India, the city is still battling with COVID, and torrential rain for quite some time now. But the spirit of ‘Aamchi Mumbai’ has not dwindled.

Saluting the sacrifices and efforts of the COVID warriors, boutique animation studio, Studio Fiction has recently created an animated short, Mumbai Mood which is an ode to the vibe and spirit of Mumbai.

“Mumbai Mood came about as an idea to celebrate the spirit of this city which I have personally seen on many occasions. Being born and brought up here, I have a strong connection with the city. The idea was to encapsulate the feeling and spirit of the city and impart hope among people that there is light at the end of the tunnel and that we will get through this together, like we always have,” shared Mumbai Mood writer/director and Studio Fiction founder Parthiva Nag.

An artists’ collective, Studio Fiction consists of five people from different walks of life with a common passion for filmmaking and storytelling. The studio is technically a product of the pandemic, when these people couldn’t go out to shoot. The team members work remotely from different parts of the country without having any ‘particular office space’. In fact, they’re planning to keep it as a regular way of functioning for the foreseeable future. Nag said, “This style of working allows us to collaborate with talents from across the world and has proved effective so far. Yes, there are times when it gets a little challenging but we are continuously working towards making that process seamless.”

The studio released its first project, an animation short titled, Over the Moon in June 2020, and has so far worked on smaller fanart creatives for Netflix. Sharanya Menon, head of design and animation in the company, and Nag decided that Studio Fiction would be a great way to keep their creative juices flowing, enhance their storytelling skills and keep busy in lockdown. “The lockdown made us think creatively about how we can create animation content for brands, OTT and other platforms,” he noted. Mumbai Mood is by far their biggest production with a team of at least 20 people all working remotely from home.

The three minute 13 seconds animated short rightfully captures the vibrancy, mood and uniqueness of the city seen and perceived through non-living items such as bags, clouds, fish, ‘dabbas’, ‘cutting chai’, ‘maska pav’ and even Coronavirus before the pandemic started and the stark contrast now. The video looks like colourful chalk drawings that induce hope and faith. 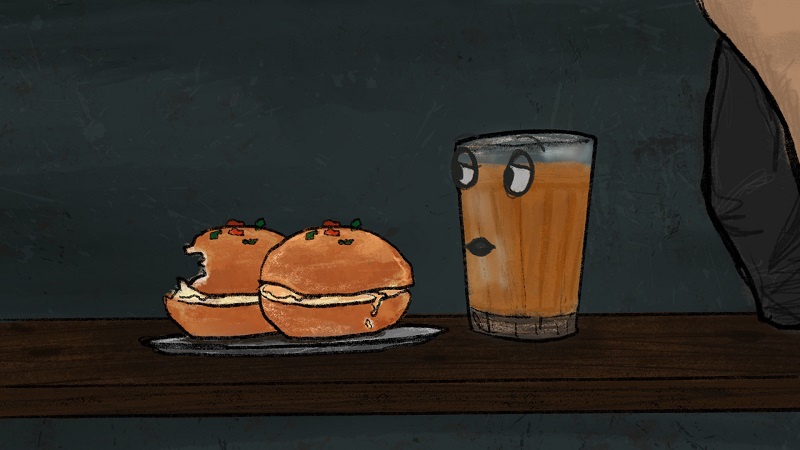 Speaking about the animation process, Nag added, “Once we had a script ready, we created a storyboard to see the flow of the film visually back and forth. Then we created rough animatics on which the first edit is done and it’s shared with the music director and sound designer. After finalising the animatic, we started the dialogues process. For Mumbai Mood we collaborated with standup comics from the marathi digital channel, Bhartiya Digital Party (BhaDiPa). The dialogue writers and myself would have Zoom calls to figure out lines for different characters. Simultaneously, I would share references for the music of the film with my music director. Once the dialogues and music were locked we went into animating the characters, the edit and pace of the film and then finally doing a coloured render of the film followed by a final sound mix.” The film took about two months to complete using Procreate and After effects.

Studio Fiction has a small but talented and efficient team :

> Menon was Nag’s first collaborator and almost every idea begins with her referencing and creating a visual look for the film. She’s a production designer for films and Ads. Her aesthetic and style are completely in sync with Nag’s.

> A wildlife conservationist by profession, Saloni Basrur is the illustrator/animator. She created most of the backgrounds for Mumbai Mood.

> Prashanth Srinivas, the music director, with whom Nag has collaborated on various projects since 2019 and is very talented. His versatility in music, according to Nag who has been impressed each time they try out something new.

> Sarang Sathaye, Savani Vaze and Pushkar Bendre are from team BhaDiPa, and are the main reason behind the film’s quirkiness. They also voiced for the film.

> Malay Vadalkar, the sound designer was again an collaborator of Nag, whose temperament and skill makes it easy for the team to not settle for anything less than perfection.

> Lastly Nag, himself is a cinematographer by profession and a Whistling Woods International alumnus. Working in the industry for a decade in various capacities, directing was always his goal. He loves to play with different formats and styles of storytelling.

“Since most of us come from a live action background, animation as a format is open for us to play with. We have worked on feature films, commercials, music videos and so on in different capacities. I am very grateful that we got this opportunity to be true to our craft and ourselves.  Mumbai Mood is an instance of that,” Nag concluded.