The series is an adaptation of children’s picture book, Zen Shorts (2005) by Jon J. Muth, which was followed by Zen Ties in 2008. 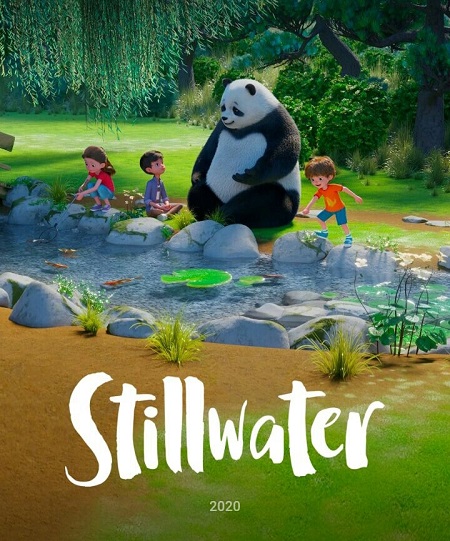 The panda carries a red umbrella and speaks in a “slight panda accent”. For the next three days, the three kids visit Stillwater. The panda rewards each with instructive anecdotes. To Michael he tells a story about good and bad boundaries, he tells Addy a story about the value of material goods, and Karl a story on how to hold frustration. Two of them are from Zen Buddhist literature and the other story is from Taoism. The stories illustrate the importance of meditation, and encourage readers to think about things that may be hard to imagine. They have strong themes about open-mindedness, compassion, and not getting too upset about things.

The name of the first story Uncle Ry and the Moon is a reference to the Zen hermit Ryokan Taigu. In it, Uncle Ry lives in a lonely place, and finds a thief in his house. Taking pity on the poverty of the thief, Ry gives him his own robe, his only possession.

The next story is the Taoist story of The Farmer’s Luck, where what first appears to be bad luck turns out to be good luck, and vice versa.

The final story A Heavy Load is a version of a Zen story of two monks who meet a woman unable to cross some water. The older monk carries the woman across, but she fails to thank him. The young monk broods on the incident, but the older one says, “I set the woman down hours ago. Why are you still carrying her?” – goes the description.