Amazon Prime Video has released the brand new poster of its upcoming animated original, Invincible, based on the comic book character of the same name by Robert Kirkman.

An upcoming American adult animated superhero drama-series, Invincible will premiere on the global streaming platform, on 26 March 2021. The official description of the new superhero saga reads:

Mark Grayson is a normal teenager, except for the fact that his father Nolan is the most powerful superhero on the planet. Shortly after his 17th birthday, Mark begins to develop powers of his own and enters into his father’s tutelage. As the young Mark comes into his newfound abilities, he grapples with the realisation that his dad’s legacy may not be as heroic as he believes. 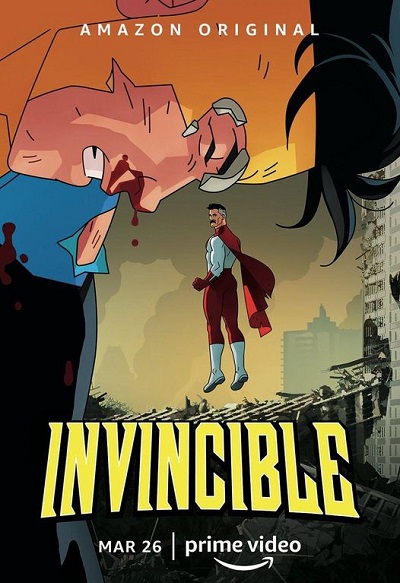 In 2017, Seth Rogen and Evan Goldberg announced a live-action film adaptation of The Invincible inspired by the same comic series. That, too, is presently “very much alive and kicking”, reports Entertainment Weekly.

Kirkman told EW that the big-screen adaptation remains in the “early going” stages but will be different from the upcoming adult animated series on Amazon Prime Video.

“That is still very much in development. That hasn’t changed. We’re just taking a long time. But we’ve been fortunate enough to have a two-track plan with Invincible. Right now we’ve got the animated series at Amazon, which is now on the cusp of launching, and then we’re also still developing it as a film series with Universal, with Rogen and Goldberg. So, those two things are still very much happening concurrently, which is somewhat weird, I guess. But there’ve been Spider-Man animated series and Spider-Man movies at the same time. So, I think we’re in good company. There will definitely be some significant differences between the movie and the television show. People will easily be able to tell them apart… We’re definitely working to make sure that the two can exist and complement each other,” he said.

Steven Yeun voices Mark aka Invincible in the Amazon Original, which drops its first three episodes on the streaming platform on 26 March before switching to a weekly format.