Prayan Animation is completing a decade this year and it has been a truly remarkable journey. From the humble beginning as a start-up, it has expanded itself to becoming one of the most diverse media companies in India. Prayan has been in the forefront of creating specialized content, production and distribution for 10 years now.

Progressing into global expansion, Prayan has extended its reach across the globe in the field of animation. It has come a long way in terms of production, post-production and co-production activities, by collaborating with YouTube Originals and Diamond Films Canada.

“No one can be successful, until they love their work.The insight gained in the initial days at Prayan, is that we have to ensure that our team has the right values and vision along with being innovative,” said Prayan CEO Vinayan V.

Their managing director Remesh Ram has inspired them to make an impact in the market, despite the challenges in present business environment. He says, “Our vision is to grow through hard work. With all the wonderful collaborations, we have gained immense experience and we plan to position ourselves better and expand our business operations. Expansion in terms of manpower and workplace has only strengthened our aspiration to extend our footprints globally and become global market leaders.”

Their recent work Dreams (A short-film which revolves around the theme of saving the earth) has been chosen as this year’s recipient of Beyond the Curve, Kidz Cinema at the Vesuvius International Film Fest and Animafest GDANSK Film Festival. 22 April is celebrated as World Earth Day and on the very same day Dreams was released on their YouTube Channel. Prayan’s production work of IP DINO embodies the spirit of filmmaking and highlights the continuous effort they put, into pushing the boundaries of the accepted norms and their never ending struggle to evolve in the medium.

Prayan produces almost 300+ minutes of 2D animation content every year, and has also involved itself in children’s book illustrations and game content development. They have recently partnered with Helen Christabel Parker, an Australian/Canadian television producer and writer from Diamond Film Canada, for a co-production called Sonic Bird, a 26*11 series, due for release in 2024. Helen has produced three number one television series for the Nine and Seven Networks in Australia and she is an award winning journalist for Fox/News Corp. Sonic Birds portrays the story of five endangered Australian birds escaping poachers;  they then discover that they’re far from home – in Europe! and realise that in order to return Down Under they must overcome their differences and each one should be a team player. 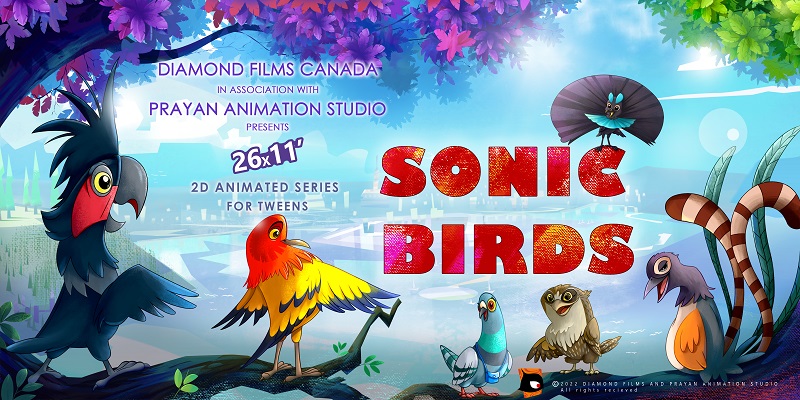 Over the past 10 years, Prayan has transformed from being a small startup to becoming a group of 80 employees and also has many partner studios now. The company employees are a mix of creative and business professionals with a shared interest, of working towards a single goal of role excellence. With this kind of a vibrant team, Prayan surely seems confident of capturing the market and celebrating many more success stories in the coming years.