Animation industry in India is growing by giant strides. Even the COVID-19 pandemic that brought the world to a standstill, couldn’t hamper the growth of the industry much, given it adeptly adapted to the new normal. Looking at the booming scenario and great inflow of talent in the past year, Animation Xpress in association with Cosmos-Maya Academy presented a virtual round table discussion today, 28 January 2021, on the Career Opportunities in 2D Animation in India.

Shayan began the conversation by saying how 2D animation is timeless and introducing the panelists to the audience by giving a brief career overview. Speaking about the current status of the 2D animation industry, Waeerkar stated, “The industry is not only growing rapidly but is blossoming at a very fast pace. The most amount of TV consumption nowadays coming from the younger generation is mostly 2D animated content. In the next 10 -15 years, this industry will skyrocket. Moreover, the trend nowadays- Bollywood inspired animated IPs- are being made in 2D animation only as it has a classical feel and connects well with the audience.” 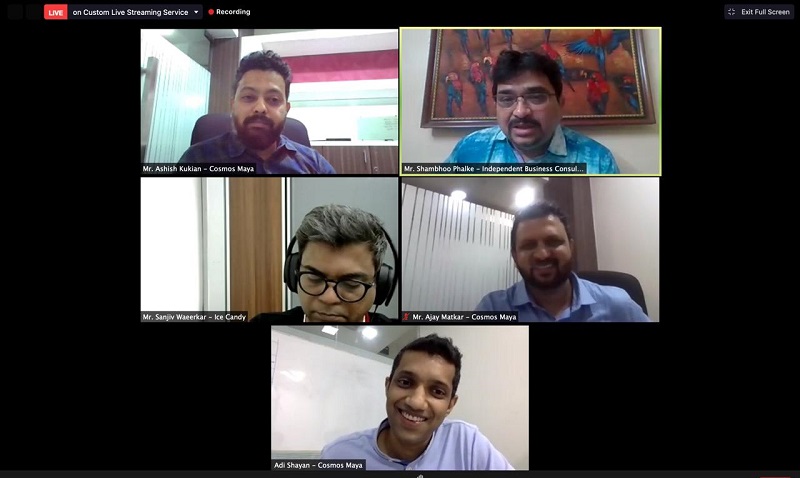 Phalke commented, “The industry matured fast from the days of Disney content coming for half an hour or more on black and white television. The affinity towards foreign content led to the dubbing industry in India – Disney content being dubbed into 14 languages. The simplicity of the characters and the medium [2D] led to its popularity. During the pandemic, a lot of animated video content has been used in terms of explainer videos and educational content and most of it is 2D.”

“When 3D came, we felt that 2D will fade out in the global market and in India. But it came back and how! At Cosmos, we did three 2D shows during COVID and I think the benefits of the medium actually found its way back, it is because the way it connects to the kids and the same way it connects to the middle-aged group from yesteryears. For instance, Bapu is targeted to kids but also connects with the grand-parents. So there are two slabs of TG (target audience) that connect the show. We keep in mind the ‘Tree of Unity’. The process of doing 2D also fills a lot of channels space. You can repurpose it. The demand and the acceptance for 2D content today amongst the consumers [kids] as well as for the creators are because broadcasters have brought in a huge revolution backing such content,” shared he.

Waeerkar, who is one of the founding members of TASI, noted that 2D is less complicated and more production friendly, hence it connects with the viewers. In 2D, characters can be easily modified, easily distorted and reimagined. “For being a 2D animator, the focus should be more on the treatment, performance, and storytelling, more than on software like Toon Boom and more. The industry is a great leveller and if you’re a great performer, you’ll survive very well. Generally, beginners can start production of their own animated shows in three to four months time,” he mentioned.

Agreeing with Waeerkar, Matkar added that 2D animation is more flexible, less expensive but requires more skilled people. “Focus more on developing your skills, not just drawing skills but overall skills, and software can be taken care of in a few weeks. 2D animation requires honing your basic skillset as it is less dependent on software, and an aspiring 2D animator should have patience and constantly challenge himself/herself in doing that. 2D animation enables less dependency, hence an animator can do a 2D project single-handedly but the skillset to create a good 2D project is very important,” added he.

Following Matkar, panelists agreed to the fact that for 2D animation, the foundation needs to be extremely strong and have one’s basics right.  Waeerkar said, “Passion and patience are the two key things to excel in the field of animation as it’s a lifelong process.”

Phalke further quipped, “Software is just like a vehicle, but you need to know to ride it. An animator is much more than just learning software but knows how to use the camera, character design, storyteller and more. Software makes it easier and faster but the skill is the main thing.”

He also rightly pointed out that there’s ‘no hurry and learn everyday.’ He also gave an example of a studio in Japan (producers of Shin Chan) whose average age of animators are 49 while in India everyone is in an extreme hurry to achieve success and fame within the initial years of getting into a job especially in a creative process like animation. He advised students to give themselves time and focus on self-betterment.

Phalke also mentioned that he recruits and identifies talents not only on the basis of observation but detailing and visualisation. “I have few ground rules while hiring people – 40 per cent fresh talent, 40 per cent females, 80-20 per cent unmarried-married ratio so that fresh talents get the help of senior experienced mentors. We go by the stance of ‘buddy mentorship’ and this has given us great results.”

As a message to aspiring 2D animators, Kukian told, “There’s a huge boom in the market for 2D animation and we need to explore more of it. 2D gives a boost to every process and 3D animation is basically 50 per cent of 2D- from production design to storyboards, only the process of animation is 3D. So, stick to your goals, keep perseverance, invest your time and effort towards making your goal a reality.”

Matkar added, “Don’t be satisfied with yourself and keep a never-ending learning curve. Hone your skills as you’re going to face new challenges every day with new projects, new episodes. So patience is a crucial thing and you should challenge yourself to be in that position.”

Shayan rounded off the panel saying, “There’s a lot of local content being created and there’s a big demand in the global space. As far as opportunities are concerned, there’s still a lot to explore out there and a lot of senior and experienced people who are here to kind of help onboard you guys in the industry and only ensure that you are successful because in your success lies our success.”