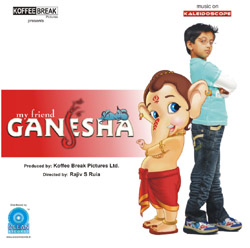 This summer, Kids have quite a spread to watch out for. Amongst it is My Friend Ganesha, a children‘s film which features an eight year old boy Ashu and his friend, God Ganesha himself.

Produced by Koffee Break Pictures, The film features 2D animated Ganesha and Mushakraj composited with the rest of the movie shot in live action. The Audio and Home entertainment rights have been procured by Kaleidoscope films ltd.

On a rainy day, the boy saves a mouse from drowning which leads to Ganesha coming in their home on Ganesha Festival day, and things start to turn around in their family. Ganesha becomes Ashu‘s friend and together with him solves his family crisis.

The audio launch of the movie was held recently with great Fanfare in Mumbai.

Speaking to AnimationXpress.com, Koffee Break director Raaman Trika shared,”This is a feel good film which highlights the beautiful friendship between Ashu and God Ganesha. The animation in the movie has been produced in house where our team of 16 artists have worked deligently for 6 months”

“We are planning an April release and are also in the midst of working out Licensing and merchandise plans. These Currently include rainwear and stationery. Also in the pipeline is part 2, Ganesha Rocks New York which will be launched on Ganesh Chaturthi and released in Diwali” he added.

Sharing his views, Vipul Kothari, Director of Kaleidoscope Films ltd. shared, “Koffee Break has really taken a good initiative in the animation front and it is something new which we have attempted. We will make it a world wide release and I hope it will do good business in market”

The movie has been produced by Koffee Break pictures ltd. and directed by Rajiv S Ruia. Audio and home video distribution rights are exclusively with Kaleidoscope films ltd.