The dynamics of how a 3D animated movie is made

Have you ever wondered how 3D animated movies are made? How do those squishy little characters come alive on the screen? What goes on behind the scenes of those seamlessly moving animated visual spectacles that we relish watching so much? In this article, we take you through the pipeline to explain each step of the process of 3D animation and elucidate the many stages of this art in a way that informs and helps our readers appreciate the workflow of the animated movies. The production pipeline of a typical animated short or a movie can be divided into three stages: pre-production, production and post-production.

The beginning of an animated movie is the conceptualisation in which we aim to lay out whatever nuts and bolts can be brought on the table for a full story. Once the story is finalised, the scripting process is set in motion along with the shot positioning and camera angles that can possibly bode well with the scenes.

The Storyboard helps to finalise the construction of the storyline helping the creators to imagine what the story would look like. Story-boarding artists follow the brief with an aim to recreate the text into sketches scene by scene.

A storyboard is a sequence of illustrations that showcase your digital story in two dimensions.

It is made up of drawings in the form of comic strips that serve as the pre-visualisation of what the movie would look like in spirit.  This brings clarity in the minds of the team as it is also accompanied by texts and notes describing things transpiring within the scene itself including camera movements. Storyboards are operational in fleshing out the original plan which is often used for referral at every stage of the pipeline. 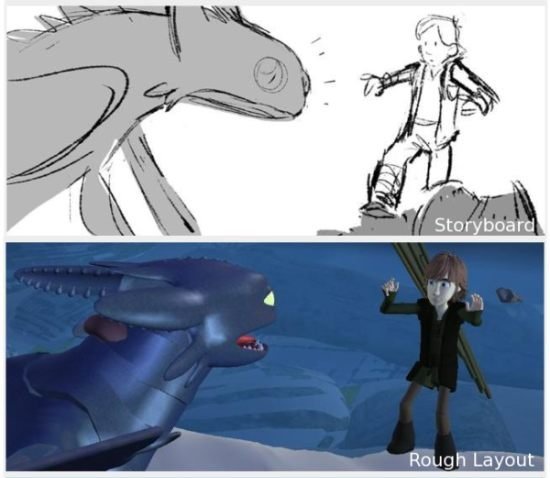 After the storyboarding is done, layout department works with the director to design the locations and costumes that are in synch with sketching. Skeleton starts to look more prominent when they begin to stage the scenes, showing the various characters’ positions determining how they are going to look in each shot. Model sheets are precisely drawn groups of pictures that cover the gamut of possible emotions and expressions that a character can make, and the variety of poses that they could adopt. These sheets are developed in order to both maintain character detail and to standardise the designs of the characters  whilst different animators are working on them across several shots.

During this stage, modelling department who create the final models are informed about the mannerisms of the character so the production can blueprint the details for further process.

In an effort to provide a rough estimation of the motion and timing of complex animation sequences and VFX-rich scenes, this department within the studio creates mock-ups called Animatics. Directors plan as to how they will go about the process infusing visual effects with the shots. 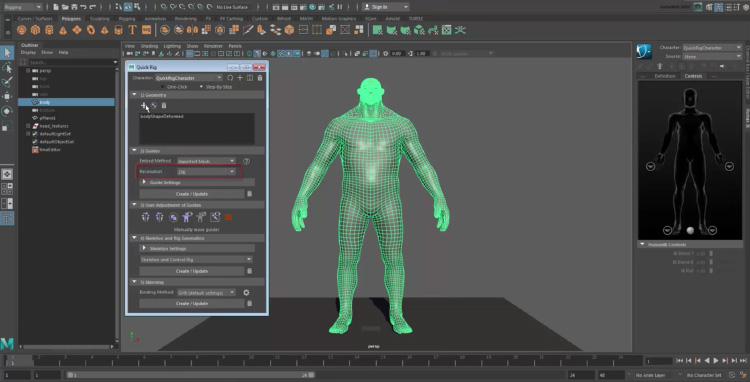 Modelers are usually split into two or more departments. Modelers tend to have an artistic background and specialise in building the characters in the sculpture format and other freeform surfaces. Hard-surface modelers often have a more industrial design or architectural background, and as such they model the vehicles, weapons, props and buildings. The most typical means of creating a 3D model is to take a simple object, called a primitive, and extend it into a shape that can be refined and detailed. Primitives can be anything from a single point (called a vertex), a two-dimensional line (an edge), a curve (a spline), to three-dimensional objects (faces or polygons). Using the specific features of your chosen 3D software, each one of these primitives can be moulded to produce an object. The model may be handed back to the Modeler, who will proceed to sculpt facial expressions and any specific muscle tension/jiggle shapes that may be required.

Once the model is approved, it will be made available to the rigging and texture paint departments, who complete the final stages in preparing the model for animation and rendering. With luck, the model will move through the production pipeline without coming back for modeling fixes, although some amount of fixes are inevitable – problems with models sometimes don’t appear until the rendering stage, in which case the lighter will send the model back to be fixed. 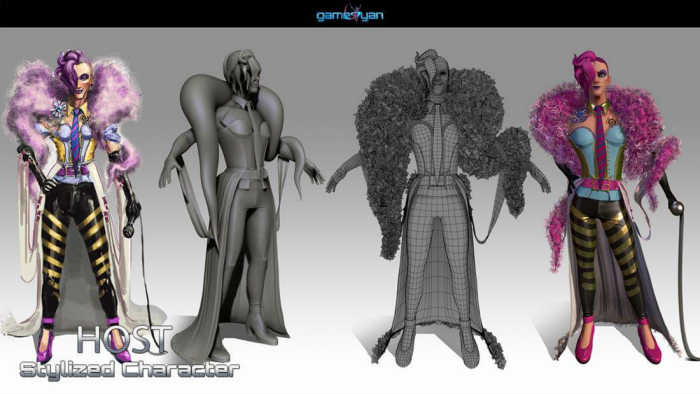 The art of giving clothes to the 3D models.

When a 3D model is created, 2D images can be superimposed on it to add colours, designs, and textures. This is called mapping where the model’s colour comes from. These maps can be created in programs like Photoshop, and the illusions of textures can be brushed onto the models as easily as if you painted them yourself; some animators even use real photographs of the textures they’re trying to create, simply captured and then altered to make seamless repeatable patterns. After the model is finalised, rigging and texturing ensues.  Setting up a character to walk and talk is the last stage before the process of character animation can begin. This is the overarching system that drives the movement of a character to bring it to life. Rigging is the process to set up a controllable skeleton for the character that is intended for animation. Depending on the subject matter, every rig is unique and so is the corresponding set of controls. Skinning is the process of attaching the 3D model (skin) to the rigged skeleton so that the 3D model can be manipulated by the controls of the rig. Texturing artists then write shaders and apply textures as per the scene requirements. Working together with the surfacing and shading departments, textures are painted to suit with the approved concept art and designs which were delivered by the art department. These textures are created in the form of maps which are then assigned to the model. Lighting can make a scene convincing, or if realism is the aim, create (in combination with materials and geometry), a scene that is virtually indistinguishable from real life.

In 3D, lights don’t actually exist as they do in the real world. Lights in 3D are objects that are designed to simulate how lighting works in real life, but in order to obtain the results you’re after, you have to apply a number of settings, not only to the lights, but to the materials.

Lighters have a broad range of responsibilities, including placing lights, defining light properties, defining how light interacts with different types of materials, the qualities and complexities of the realistic textures involved, how the position and intensity of lights affect mood and believability, as well as color theory and harmony. In modern production companies, the practice of judiciously planning a character’s performance frame by frame is applied in 3D graphics with the help of the same foundational principles and aesthetic judgments that were first developed for 2D and stop-motion animation. If motion capture is employed at the studio to digitize the motion of real actors, then a great deal of an animator’s time will also be spent cleaning up the motion-captured performance and completing the portions of the motion (such as the eyes and hands) that may not have been digitized during the process. This is made simpler using the simulcam too.

Post-production marks the final step in a process, and it refers to the tasks that must be finished or executed after the filming or shooting ends.

These include the editing of raw footage to cut scenes together, adding transitional effects, working with voice and sound actors and dubbing to name just a few of the many post-production tasks.

Overall, however, the three main phases of post-production are compositing, sound editing, and video editing. This department is responsible for putting together the sound recordings in preparation for the final sound mix, ensuring lip sync and adding all of the sound effects. Video editing is the process of arranging shots to create a seamless final product, and it is at this stage that any unwanted footage and scenes are removed. Editing is a crucial step in making the video flow in a way which achieves the vision of the creator.

The production pipeline is uniform in most studios, however some studios likely to tweak around and create a custom pipeline determined by the type of project they are currently undertaking. Animation production is a collaborative and coordinated process where artists work together, making most of the available to achieve the final goal.