When actors, chainsaws, and shark-filled tornadoes come together onscreen, it’s television magic. Such is the case with Sharknado 2: The Second One, which delivers even more excitement than the original Sharknado of 2013.

Behind the whirlwind accompanying the Sharknado phenomenon resides a group of talented artists at The Asylum in Burbank, California – all skilled at creating impressive visuals with LightWave 3D software.

“From the outset, the entire Sharknado 2 project was challenging but perhaps a little easier than ‘the first one,’” said Emile Smith, VFX supervisor on Sharknado 2. Smith credits LightWave 3D and its robust features to deliver final renders in a very short time. “We use LightWave for 99 per cent of everything. We used a lot of the new Dynamics tools as well as the TurbulenceFD plugin [from Jawset] to generate the actual Sharknado, which is exactly what you might think it is – a monster tornado, filled with amongst other things, hungry angry sharks.” 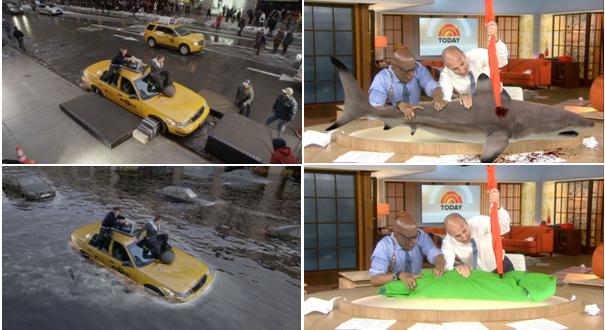 The opening teaser of Sharknado 2 takes place on an airplane in the middle of a storm. This presented the challenge of generating art-directable volumetric clouds that allowed the plane to fly through a ‘Sharknado’ before landing in New York. “This sequence brought in every effect we would use in the film, except for a water surface,” explains Smith. “There was a lot of digital double work for the latter part of the film and the volumetrics of the final Sharknado sequence will entertain for sure. Perhaps some people will even be impressed by how real the VFX looks. Of course, if it didn’t look real, it wouldn’t be funny.”

Placing debris (and the sharks) inside the cloud formation was where the crew started to have a lot of fun in LightWave. The creative brief called for the creation of an animatable 3D tornado; LightWave allowed the animators to animate the tornado before handing it over for simulation and rendering.

There’s a particular scene in the film where a single taxi completely surrounded by man-eating sharks is stuck on a flooded New York City street. Parts of the scene were shot on location, while other elements and environments were completely green screened. “The visuals tell the story of the two occupants climbing onto the roof of the cab while several sharks are swimming around and sizing them up,” says Smith. “With LightWave, the multiple elements in the passes and layers for this sequence came together quickly.”

“This project was on a very tight timeline. LightWave’s ease of use and really straightforward nature helped The Asylum crew hit the deadline we were presented with,” says Mark Hennessy-Barrett, VFX artist on Sharknado 2. “Because LightWave is a really forgiving piece of software to use, we were able to break the rules and take immense liberties in the rendering engine to get the job done and out the door.”