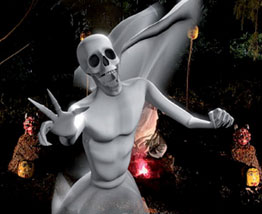 The serial is a fantasy thriller on the lines of superheroes such as Batman, Phantom and Superman but here as is evident from the title of the show, the superhero or the main character is Mayavi. Produced by G.V films the show has been on air on Jaya TV for almost a month is telecasted every Saturday at 9pm in Tamil. Negotiations are on to telecast the Hindi version of the serial on channels across India.

Inspired by the comic book character ‘Mayavi’, the idea of using the character was thought about by Elavarasan, the director of the serial. Work on the project started in December ’05 with 4 artists working on the central character, 10 on the important background characters and around sixty to eighty artists on other aspects of the film. Each episode took around eight days to shoot with a Sony Beta SP camera.

The series revolves around Mayavi, a mysterious character whose right hand is made of steel endowed with magic powers. When he comes into contact with electricity his whole body disappears and only the steel hand is visible. Mayavi’s steel hand embodies special powers with each of the five fingers capable of drawing from one of the five basic elements, that is fire, wind, water, earth and ether. This scenario called for creating highly stylised, hi tech looking locales, backdrops and props for the protagonist to evolve into a larger than life character achieving the utmost impossible tasks. The villain who is Mayavi’s enemy is extremely powerful with devilish powers and a dark past. This clash of the titans is the central theme with each character coming from varied backgrounds that needed clever handling of interplay. 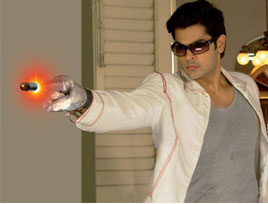 Talking about how the cinematography of the serial was planned Ravee, CEO. G.V Films shared with Animation Xpress.com, “Unlike traditional Cinematography anaglyph 3D devolopment involves perfect understanding of technology, technical limitations such as only wide angle, lighting, colour, production design, art direction, costume design, background and foreground colour and depth values, post production and C.G. In other words the cinematographer has to take into account of the entire gamut of these before embarking on each shoot and, therefore has to be a perfect team man with an aptitude to learn all the time and at the same time learning from mistakes. Most of the time in each shoot basic colours of RGB have to be kept away which in itself poses a great challenge for the cinematographer to improvise and innovate all the time. Also as the cinematographer he should be able to exploit every real time opportunity to capture out of screen 3D live effects within each scene so that it need not be dealt by CG and post production which is a lot more time consuming, laborious and expensive.”

To view the show, viewers have to wear anaglyph glasses which have been made available through channels such as cable Operators, retail and news paper vendors. Over fifty lakh glasses have already been purchased in Tamil Nadu and the aim is to reach another fifty lakh.

The glasses are standardized and uniform in colour with high optical quality. Looking for vendors who could supply them in large quantities was a huge task in itself. On the 3D technology which was acquired from the U.S, the entire team had to be trained thoroughly for a couple of months. It was like a back to school process with learning the technicalities all over again. The specially designed rig along with the handling and assembling of the two cameras weighing over 75 kgs was a humongous task.

Established way back in 1989, the company has worked on films such as Mounaa Ragam, Agni Natchathiram, Nayagan, Thalapathi, Anjali, Indira, Tamizhan, Chokkathangam and a 3D TV series Paramapadam among others.

On an ending note Ravee shared, “For Mayavi, we decided that this should not be like any other regular soaps that the viewers are used to with slow paced tear jerker and the entire serial is shot in such way that it gives a magnum opus cinema feel. Working on the serial was quite a trying task but we didn’t compromise on anything.”

“However testing and trying in the end it was an exhilarating experience with the overwhelming response. What others saw as adversity we looked at it as opportunity and in the end it paid off. With this 3D we have created a Fourth D, a space for GV Films in the minds of every viewer. On the whole it was a great learning experience” he concluded.