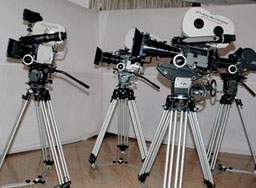 much before one can hear action, there’s already a lot that has been in action on the sets, in the minds of the creative geniuses that make movies happen. the director, the cinematographer, the actors, even the workers on the set.

Film making is a business yes, but it is more of a passion. For a Cinematographer or a visualiser, that passion manifests itself in the desire to achieve ‘that perfect frame’ , ‘capturing that nuance that speaks volumes’

While machine can never replace man, it certainly can empower, to do better.

Indian cinematographers and cameramen have an exciting avenue open to them with the introduction of Panavision Inc’s high end specialized film cameras. The leading Camera designer and manufacturer of high-precision camera systems, including film and digital cameras, lenses and accessories for the motion picture and television industries has entered the country, courtesy a tie up with Prasad Group, one of India’s premier providers of film production and post production services.

When asked about the idea of bringing Panavision to India, Ramesh Prasad said, “Panavision are the providers of the very best in image acquisition systems available anywhere in the world. Some time back Panavision identified India as an important market and started identifying a company with similar values and cultural identity to partner with. We are very proud to have been recognized by them as a company meeting their expectations and today we have Panavision India in association with Prasad Group”.

On the same note, Martin Cayzer added, “India is one of the World’s busiest and most critically acclaimed film industries and Panavision has been searching for many years for a company that could successfully represent us here. It’s been a long process as Panavision chooses its agents very carefully and hopes to have a very long relationship with them”.

The Panavision range of Sync sound cameras like Millennium XL, Panaflex Platinum and the all time favorite GII by which movies like ‘Pirates of the Caribbean’ and the Oscar winning film for cinematography ‘Memoirs of a Geisha’ are now available in Mumbai, Hyderabad and Chennai through the state-of-the-art facilities of Prasad Group. They have established exclusive service and testing infrastructure with professionals trained by Panavision, in Australia. Panavision is also dedicating an engineer with global experience on its equipment to provide complete support in India.

Panavision is known for only giving its equipment on hire and not selling it. On this Martin commented, “This is keeping in line with their policy of quality and service where every piece of equipment undergoes an elaborate series of testing and calibration procedures after every shoot to ensure the customer get the best every time”.

With Panavision cameras now available on hand, we can expect movies with more and better visual effects.