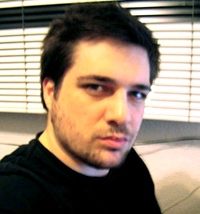 “I like trying out 3d, 2d, photograph, classic painting and digital art”

David Ferriz, an illustrator and a 3d artist by profession, runs a gaming company with his brother Fransisco Ferriz, for mobile phones, in Spain by the name of DevilishGames. Ferriz brothers are no new name in this industry; and their incredible works have influenced one and many. Along with mastering the skills, they have added a good new flavour to the development of mobile games.

Could you introduce yourself?
My name is David Ferriz and I am an Illustrator and artist 3d. I was born in Alicante (Spain) in 1982. I studied illustration in the School of art of Alcoi. From a very young age I was interested in videogames. I created my own company of development “DevilishGames” in 1998.

Tell us about your journey in CG so far. How you became involved in the cg industry?

I began to draw when I was very young with my brother Francisco Ferriz. During years I have worked creating architectural 3d, graphical design, web design… until I was able to dedicate 100% to the videogames. At present time I create graphics for the games of my company “DevilishGames” and also I make graphics for games shareware for other companies.

You illustrate as well as give your illustrations a 3d form. Is toon your favorite genre?
My favourite technique is the traditional illustration, but I like a lot to experiment new techniques. I like trying out 3d, 2d, photograph, classic painting and digital art. Often the election of the technique is by the type of work. 3d low poly, animation, games for mobile or fairytale illustrations are all different and require different techniques. I always like to obtain an original result but adapting it to the necessities of the product or the public that are destined the art. I like to obtain an original result by adopting different techniques according to product or the clients

Which softwares do you use for your illustrations and for 3d works?
I Work with a great variety of tools, I use classic tools like the pencil, acrylic or watercolours. Also I use a wacom tablet for digital illustration with Gimp or Photoshop. For 3d, my favorite tool is 3d Studio Max.

Your artwork “Pulpito” was much talked about. How did you go about modeling and texturing it?
The illustration of “pulpito” is based on a character of videogame for mobile hones that I developed with DevilishGames. The videogame is called “Movil+Kota: pulpito” and has been enough successful to a large extent of the world.

The model is quite simple. I wanted the character to be very expressive and showy since it was meant to be for mobile phones, I decided to create a simple face, with great eyes and great expression in the eyelids. Something very simple and attractive. The textures are simple photographics for the scene and several material falloffs with transparency and reflection in the character. For the lighting I have worked with different blue tones to obtain an aquatic effect.

Did you use any specific shader for the bubbles? Or was it post produced?
For the bubbles I used a simple material with reflection and refraction. I use postproduction almost always. My speciality lies in illustrating, I always I try to apply my manual touch in my works

The render has a soft glow. Was it post produced?
The balance of colors, brilliance, particles of water and defocusing is post produced.

Lets talk about “The boy”, which was widely liked. How did you go about designing him?
“The Boy” is an illustration created by my brother Francisco Ferriz. It is a design for one of our videogames. My brother and me have many common shades but each one has its own own style.

What inspires your artwork the most?
I don’t have a concrete source of inspiration. Depending on the type of work, I can extract the inspiration from photographes; others might want to browse the Internet book references… but I always to create something original and with own style.

Since most of your artworks are for videogames, what pointers do you keep in mind?
At the time of creating illustrations for videojuegos I always consider the type of game, the public to whom it is oriented.

It is not the same to create a game military for hardcore players and a game of puzzle game for casual players.

Also it is necessary to consider the platform and engine of the game. At the time of raising a game for mobile phones is very necessary consider the limitations, is not the same to create graphics for a game 3d in real time that to create vectorial graphics 2d for a game flash.

Create graphics for videogames is complicated. We are a small group of developers, therefore, the artists we are very versatile. We must have knowledge and concepts to model, to create story boards, concept arts, to animate, to texture, to illustrate… we must be very versatile artists.

Of your professional and personal work, could you tell us which piece of work you are most proud of and why. Tell us a little bit about that image.

The work that I am proud of is directing the art of a demo of a videogame called “Prieto: escapando de la oscuridad”.

In this game we wanted to create a very original style to have graphics different from the rest of games. The work was very hard. I worked during 3 months to create the design of the characters and 7 scenes for the demo.

This work was created to demonstrate our graphical capacity and thus to get new clients.

The project was awarded with the special mention to the “better art” in the prize of creation of videogames 2005 organized by ArtFutura and Sony PlayStation in Barcelona.

The technique used for the game mixes 3d models, photographed textures and 2d illustration. I am very satisfied with the result. The game is well planned and is exactly what we wanted to obtain. It was an outcome many months of hardwork and experimentation.

Tell us something about the rendering process for the toons.
My greatest secret is in the simplification of the art forms, the expressive outline and in working much with my own style. I like to create expressive brushstrokes with a good mixture of color.
ONLY FRIENDS

How did you conceptualize “Only friends”?
“Only friends” is a concept of my brother Francisco Ferriz. The cow and the bull are mascots that we created for our Web page and our logo.

We thought that he would be amused to see them in “affectionate attitude”.

We like to mix amusing characters and “adult” concepts.

All your artworks, is a result of an amazing co- ordination between your illustrations and Francisco. How difficult or easy it is to give the illustrations a 3d form?
My brother and I often work together. We coordinated ourselves very well since we were young. My brother it is industrial designer, likes much 3d. loves doing 3d but I am an illustrator. We like to experiment and compete together. We take each other’s advice and always learn in the process.

You are a mentor for many other artists. Who is your hero/mentor?
I do not have a mentor.

I do not like to copy to the others, but always attempt to have my own style… but I inspired and I like the work of my brother Francisco, I always I learn new things of his works. When we are working on separate projects, he always comes up with new ideas, designs and styles. He always surprises me with his innovative and captivative creations.

I should say that I am fan of Tim Burton, the style of his movies is exceptional. I love the aesthetics of his productions. I am also fan of the games of Nintendo.

Of 3d renders and illustrations, what do you prefer doing?
I like a lot to experience with technical 3d and 2d but if I have to choose, I prefer illustrating. I feel relaxed when I am coloring with acrylics.

What do you suggest to the wannabe artists?
I always recommend to the artists to have their unique for their on style. For me it is very important that people only recognize my illustrations by seeing them. It is not necessary to copy to be good. Also it is important to learn things from forums and the internet, which is probably the easiest way to learn new things.

How do you see the industry evolving over the next 5 years?
I think that the industry will continue improving technically. However I hope these techniques doesn’t put an end to the creativity and manual skills. For me it is more important what is able to express an animation or an illustration that the technical quality.

What are your future plans?
My future plans with DevilishGames are to throw 2 video games shareware in next months. The first one will be a project in which have worked from 2003, the game it is called “Nuts & Scrap”. The following one will be a video game experimentation called “Sonoro TV”.

I also hope to continue working in several game projects for mobile phones.

Also, I hope to continue receiving responsibilities to work with other companies, creating graphics for games and animations.