Father of Indian Animation and Founder of Graphiti, Ram Mohan, who has kept inspiring the Animation Industry for decades, has been selected for the prestigious Padma Shri Award, India’s 4th highest Civilian 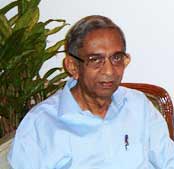 award, that was announced yesterday, which marked the 65th Republic Day.

Ram Mohan, who believes that Animation is a combination of Story Telling, Design and Performance, has been serving Indian Animation for more than 50 years, and was also honored with two National Awards for the Best Film on family planning, “Baap Re Baap” and Best Animation Film; “You said it”.

A flashback on his academics shows us that he was Graduated in Science from the University of Madras, but gave up post-graduate studies to join the Cartoon Films Unit, Films Division, government of India. Ram Mohan received his Animation training from Clair H. Weeks of Walt Disney Studios, under the US Technical Aid program.

Speaking to AnimationXpress.com, Ram Mohan, says, “I am happy to receive this recognition. Animation has been a neglected area for a long time, but now this recognition for the work I was doing with my fellow animators is a very good feeling.”

“I consider this award more as recognition of the Indian Animation Industry and the work carried out here in all these years.” concludes, Ram Mohan